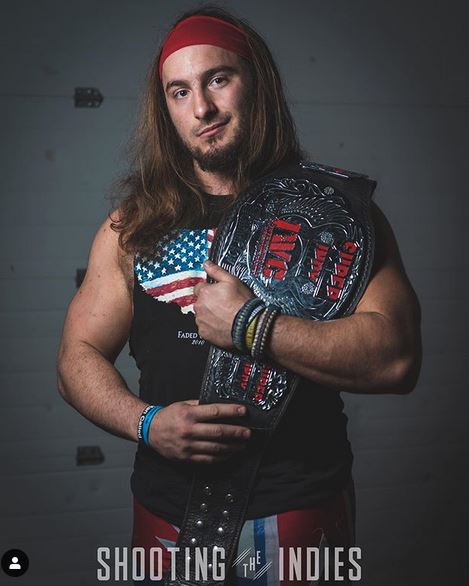 The legendary Jim Ross shouted that line into his headset during a memorable title match on a 2002 edition of Raw when Jeff Hardy, still known as primarily a tag team specialist at the time, inched his way toward the Undisputed title rung by rung in a bout against The Undertaker. While Hardy wasn’t victorious on that particular night, his performance that elicited such a passionate response from Jim Ross opened the eyes of the wrestling world to the potential he had as a main event star. Hardy’s dedication and drive to make a name for himself in the sports entertainment industry is what inspired JR’s memorable call. It also inspired a young fan that was glued to the television set that Monday night.

Over a decade and a half later, with social media such a force in society, an aspiring grappler still in his rookie year of wrestling took a chance to make himself famous. An incredible coast-to-coast shooting star drop kick went viral with more than 65,000 views online and had the independent wrestling world buzzing on Twitter. The young athlete that gracefully soared through the air on that clip was steel city standout, Johnny Patch, the same youngster that was memorized by Hardy’s performance on Raw years ago.


However, his road to going coast-to-coast in a cage match didn’t start on the top rope, but rather on the canvas of a training school in a converted storage facility. Involved in sports and a diehard wrestling fan throughout his youth, Patch began his search for an introduction into the industry through the Pittsburgh scene, which often features nearly weekly events run by various groups throughout the area. He knew his background in football, baseball, and snowboarding would be helpful skills to have for the journey into sports entertainment, but he had to find a place to learn the ropes. After some research, he found the International Wrestling Cartel, one of the most well-known independent groups in the area and an organization that showcased several notable stars throughout its history. Run under the direction of longtime promoter Norm Connors, the company’s ownership changed a few times to its current organizer, Justin Plummer. The decorated history of IWC includes matches from Corey Graves, Johnny Gargano, Elias, DJ Z, and many others that have transitioned to a national platform. With names like Brit Baker and Elias as alumni of the training center, Patch decided it was the place for him to learn the ropes, but he also realized the importance of the fundamentals of the genre.

“Biggest lesson learned. Mouth shut, ears open. Take in as much as you can and be humble about it. Another important lesson was, ‘No you’re not jumping off the top rope until you learn the important things in wrestling.’ I trained for a full year and was not permitted to go to the top rope until the eighth month,” Patch explained.

Another wise learn the aspiring grappler learned was the bright lights that beamed through his screen while he admired the athletic ability of Rob Van Dam, who is another athlete that he cites as an inspiration, was that the harsh reality of the industry was anything but glamours. In fact, as earlier as his first time to step into a ring put his dedication and passion to pursue this path to the test. Working mostly 12 hour night shifts, Patch found himself on his way home around noon with enough time to sleep for a few hours before he was back on the road for an hour commute to the training center for a few hours of lessons that night, a process that he repeated for the entire duration of his training process.

“I was exhausted for a year straight, and my trainers made sure to push me and not take it easy by any means. They made it clear nobody is forcing me to be there and it’s all about how bad I wanted it,” Patch commented.

After nearly 12 months of commutes home in the sunlight following the night shift to the drive to the ring to tediously practice the craft of professional wrestling, the dedication to accomplish his goal paid off, as Johnny Patch was scheduled for his debut bout at IWC’s Proving Ground event in September of last year. With international star, Johnathan Gresham in the main event against independent standout Gory, Patch was very surprised when he learned that his opponent was another international star, DJ Z, who made IWC his home promotion before he worked for Impact Wrestling and appeared on 205 Live.

“I had no clue and no idea what was in store for me. I didn’t find out until they posted the match graphic. An entire year of physically, mentally, and emotionally killing my body paid off. DJ Z was dream match that I was hoping one day that I’ll have a chance to face him. Never in a million years would I have thought I’d be across from him in the ring on the night of my Professional Wrestling debut. I’m grateful that he was the first man I worked with in the squared circle. I am even more grateful for Justin and Jenny Plummer giving me the chance to show how hard I worked over the course of that year. They could’ve put me in a battle royal and told me have a nice day,” Patch said.

With his boots laced and an enthusiasm to chase any opportunities in front of him, Patch spent the better part of the past year looking for the chance to perform for different crowds in different areas, lodging miles in the car to work ring crew of independent cards just to show his face to promoters. Always with his gear in tow, Patch recognized the value and necessity to expand horizons in the industry.

“You have to travel you have to put in the hours and get out there. Staying in the same 50 or 100 mile radius won’t help you expand your career. I’ve met some of the greatest people traveling to different cities. From Cleveland to Rochester all the way to Raleigh. Some of my best friends I’ve met have been from traveling to different cities. I recently debuted for AIW and it took me a very long time to get this opportunity, he explained.

Throughout his formative months under the IWC banner, Patch made an immediate impression with his athleticism and natural poise in the ring. Just a few months into his career, he showed skills that exceed his experience level. This past August, the previously mentioned coast-to-coast shooting star drop kick brought him notoriety as something more than just an IWC rookie, a reaction he didn’t anticipate at the time.

“I had the idea already and I wanted to see if it was physically possible to try. I would tell a few people about what I wanted to do and they would look at me like I was stupid. I owe a lot of what I can do in the ring to snowboarding because in that extreme sport, balance and body control are key. For the social media, I was not expecting that. I hoped I’d get a few retweets and a pretty cool clip for the highlight tape. My phone stopped working I was getting so many notifications” he said.

Just a few months ago, Patch reached another level in his career, winning the IWC Super Indy title from international star Josh Alexander. The belt, one of the staples of the promotion, was held by such names as AJ Styles, Chris Sabin, Low Ki, and several other well-known athletes during its extensive history. Despite the early success, Patch knows there’s much work to be done ahead of him, but he also has lofty goals to keep him looking forward.

“I want to participate and win the Super Indy Tournament. Enter into CZW Tournament of Death and Best of the Super Jrs. Match with Will Osperay. Travel to Japan and Mexico to train and wrestle,” he said.

The 25-year-old Johnny Patch remains focused to make a name for himself and certainly appears to have the drive and ability to do it. If he becomes an international name remains to be seen, but his story is a shining example of what can be accomplished if an athlete is dedicated to be successful.