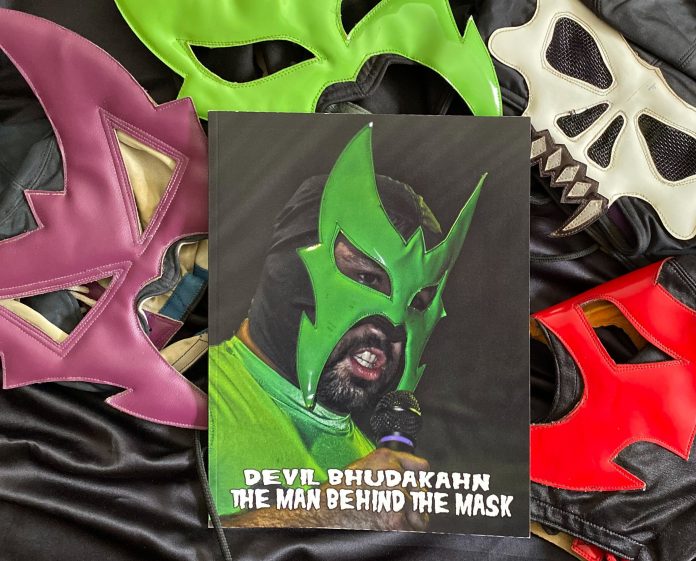 The unique world of professional wrestling, like all forms of entertainment, blends many different aspects to entertain the paying audience. With as unique as the genre is, the personalities that populate it can be just as unique. Ominous villains that antagonize the crowd to draw their jeers when the lights are bright and the red light is on, often exchange hugs when greeting their peers just hours earlier before the doors to the venue open. Energetic heroes that demand vengeance in the ring usually inquire for advice on the grappling arts behind the curtain from the antagonist.

James Fawcett, a longtime grappler around the steel city, was a prime example of this. Known inside the ring ropes as Devil Bhudakahn, a vicious heel with dastardly intentions, the man behind the mask designed to reflect his in-ring name, was proof that there was much more than simply what viewers saw on camera. Fawcett, who worked nearly a decade in the squared circle for virtually every established group in the Pittsburgh area, had an influence on the region that is still seen today. When he laced up his boots for the start of his career in 1998, the man that would later became Bhudakahn didn’t know that his enthusiasm for the international aspects of the sport would lay the foundation for a style in the area that helped it become one of the mainstays of the east coast independent circuit. Along with Pittsburgh legend, Super Henti, Fawcett brought lucha libre style action to cards around Western Pennsylvania, something that wasn’t commonplace at the time. He learned much of that Mexican influence from his trainer, Shirley Doe, a nearly 25-year pro that remains one of the most respected veterans of the Pittsburgh area.

“He was someone who loved wrestling more than just about anyone I ever met and loved to share his knowledge with others,” Doe commented.

Similar to how Doe passed on his knowledge to Fawcett, the man underneath the Devil Bhudakahn persona wanted to share his lessons with others to allow them to achieve their personal goals as well. Once such example of this is, Bobby Piskor, known among wrestling circles as Bobby Williams when he wears the stripes or Robert Parker Williams when he wore the boots. Bobby is considered unanimously as the best active official in Pittsburgh, and has an accomplished in-ring career to go along with it. Like many, Piskor grew up idolizing the larger-than-life stars that beamed through his TV screen and at the age of just 15, Fawcett took the youngster under his wing to give him a chance to live a dream. Barely old enough to attend high school, with the encouragement from his family, young Bobby went to the late, “Gentleman” Joe Perri’s training center, a no frills academy in the back of a warehouse in Penn Hills, PA to begin to learn the fundamentals of sports entertainment under the guidance of Fawcett.

“I began my training in March of 2001. It was a slow process because I was 15 years old. I worked a lot originally learning the aspects of refereeing. He along with Joe Perri showed me the basics. Eventually, I would learn to bump and run the ropes. Devil was extremely patient with his students. He broke down the psychology of why we do things. Unfortunately, after less than six months the school closed down. I learned a lot of chain wrestling because the ropes in the ring were bad, and also psychology,” Bobby explained.

The next few years saw Fawcett work with a myriad of names from the Pittsburgh scene of that era, forming a stable with his trainer Doe, and wrestling a pivotal feud to the start of the career of CJ Sensation. Another group saw him team with Jake Garrett and Glen Spectre. Devil Bhudakahn won championships in both IWC and PWX, two of the longest-running organizations of the region. He also wrestled for and did some booking work for Championship Wrestling Federation, another league from around the same time frame.

Usually clad in a Danzig t-shirt with a comic book in his back pocket, Fawcett arrived at venues with a sense of enthusiasm for that night’s event, and that dedication to the sport saw him work in nearly every role possible in the business with his time spent as a wrestler, trainer, and agent. Many suggested that he enjoyed the comradery and the chance to teach others on their own journey as much as he enjoyed each chance he had to step into the squared circle.

“He always told me to have a plan of where I wanted to go. Don’t go out there with everything scripted out, but have an idea of where you want to go. That’s a good motto for life as well as wrestling,” said BC Steele, widely regarded as the best manager in Pittsburgh and Piskor’s real-life best friend that accompanied him to the previously mentioned training school to learn from Fawcett.

In July of 2007, James Fawcett tragically took his own life just a week after what would be his final match. He was 32.

For Bobby, the reality that he lost his mentor and close friend to suicide was an overwhelming trauma, something he wasn’t prepared for and couldn’t comprehend. Piskor spent many weekends the previous six years alongside Bhudakahn and considered the time he spent with him a valuable learning experience in life as well as professional wrestling. Without Fawcett to guide him, Bobby began to see his own life spiral, plagued by questions about if there was anything he could’ve done to prevent his friend’s death.

“I dealt with Devil’s passing terribly. I blamed myself because I spent an hour with him right before his passing. I shut a lot of people off in my life and built a lot of walls. I lost passion for life, and wrestling. I dealt with his death in a terrible way. A lot of drinking and pills. I didn’t care if I lived or died. That was until I met my wife. She helped bring me down to realty and face the underlining issues of my mental break down,” Bobby said.

Today, a full-length sketch of Devil Bhudakahn is framed in the Piskor home, artwork by Bobby’s wife, Natalie, a talented artist that has published various art online. While his image decorates their home, a tattoo of the Bhudakahn mask on Bobby’s arm memorizes his friend. Eventually, Bobby began the healing process to truly mourn from the devastating effect that suicide has on those let behind with unanswered questions. Knowing how grateful he was for Fawcett’s kindness, his family gifted Bobby his wrestling memorabilia, a collection of various mask and boots that had been seen in many Pittsburgh rings. With a clear mind, Bobby wanted to develop a project to not only go in-depth on the career of Devil Bhudakahn, but the impact of suicide in hopes of helping others left behind deal with the tragedy that can impact people from any aspect of life. That project was the recently released book, Devil Bhudakahn:The Man Behind The Mask available online.

“I really contemplated the idea of the book after Devil’s mom gave me his wrestling bag. When I began writing, I quickly turned this into a passion project. I wanted to educate people as to who Devil was, and how important he is to the Pittsburgh wrestling scene. Also, he had three kids who were small when he passed away. I would hope that they can stumble across this and realize how important their father is to so many people,” Bobby commented.

Bobby plans to donate his proceeds from the sale of the book to Suicide Prevention Lifeline, an organization that offers many resources for anyone in crisis. The pages of Piskor’s publication detail Bhudakahn’s influence to provide a path for lightweight wrestlers on the Pittsburgh scene in the years that followed his career. James Fawcett passed away far too young, but his influence on those inside and outside of the ring certainly left a definitive mark on the sport that he has an immense amount of passion for and dedicated over a decade of his life toward. Many lessons can be taken from the words Piskor penned amount his mentor, but perhaps the most admirable aspect is that the publication will help others, which is one of the things that James Fawcett was most known for in his pro wrestling career.