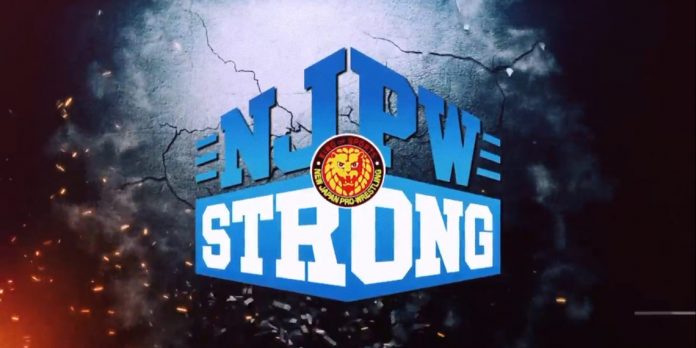 Mascara Dorada vs. Misterioso
Mascara Dorada’s taken down with a waist lock to start, but kipped back up for an armdrag as he and Misterioso went back & forth in the beginning stretch. Misterioso trips Dorada to the mat for some pinning attempts, but Dorada’s monkey flip takes Misterioso down as we get duelling two counts then a roll back up as Dorada floated out of a monkey flip. Some rope walking led to a springboard ‘rana to take Misterioso to the outside, with Misterioso catching a tope con giro before he swung Dorada into the rails. Back inside, Misterioso went up top but rolled through a senton then rolled through a Dorado rana for a near fall as things went to the corner for some running knees. Misterioso gets some two counts out of that, before a Fireman’s carry slam left Dorada down a senton atomico misses with Dorada then lifting Misterioso to the outside for a rope walk flip senton off the top rope. Back inside again, a springboard senton nearly wins it for Dorada, before a shotgun dropkick off the top got Misterioso back in it. Another dive sees Misterioso crush Dorada with a tope con giro, which nearly got us a double count out as both men landed in the railings back inside the ring Misterioso shrugged things off for a dropkick, before the pair traded right hands. Dorada’s lifted to the apron, but came back with a gamengiri that knocked Misterioso down briefly he’s back with a gamengiri of his own as the pair climb the buckles, leading to a top rope ‘rana from Misterioso. Misterioso keeps the pressure up with an electric chair into a German suplex almost a Croyt’s Wrath but Misterioso couldn’t get a good cover on it. After kicking out, Dorada tries a C4, but couldn’t get it as he instead spiked Misterioso on a German suplex, then a satellite DDT before a Dorada Driver gets the win.

Robbie Eagles vs. Kevin Blackwood
Robbie Eagles & Kevin Blackwood go from wristlock to waistlock in the early stages of this match before Blackwood teased a Sharpshooter, forcing Eagles to scurry into the ropes then a shoulder tackle drops Blackwood next, before leapfrogs and dropdowns led to Blackwood again tripping Eagles for a Cloverleaf attempt that was pushed off. Eagles hooks the ropes, but gets chopped by Blackwood, before a springboard armdrag and a ‘rana took Blackwood down. A spinning heel kick from Eagles keeps him ahead, as did a low dropkick but Blackwood’s up at one and returned with a back elbow. Palm strikes and kicks wear down Eagles, who ends up getting tripped and stomped on after another exchange. Blackwood follows with some choking by the ropes then a back suplex for a two count then some Danielson elbows. Eagles elbows out of an abdominal stretch, then took out Blackwood’s knee ahead of a clothesline to the back of the head. Kicks take Blackwood to the corner for some running double knees, before a 619 to the back of the knees led to a low dropkick that Blackwood blocked out of the corner. Blackwood keeps going with forearms and elbows, before his Exploder suplex was blocked while dualling front kicks knocked both men down to their knees. We’re back to forearms from there, before a head kick from Eagles, then a superkick led to him missing an enziguri as Blackwood’s knee strike and discus forearm looked to have him back in it. A delayed cover from an Pulse Drop nearly wins it for Eagles, who adds a springboard dropkick to the knee, before his Ron Miller Special was pushed away. Blackwood returns with a high angle cloverleaf as he looked for the stoppage but Eagles gets to the ropes as he then snuck in with a roll up for a two count then a leg sweep and a head kick keeps Blackwood ahead as did a deadlift brainbuster, before Blackwood jarred his knee after missing a double stomp & that allowed Eagles in with a Turbo Backpack for a near fall, before a 450 splash to the knee and a Ron Miller Special makes Blackwood tap out.

We get a video package focusing on Aussie Open’s Strong Openweight Tag Team Title win and Jorel Nelson’s backstage challenge for them.

Strong Openweight Tag Team Title Match
Aussie Open (c) vs. West Coast Wrecking Crew
Kyle Fletcher & Jorel Nelson start us off, Kyle’s standing switch helps take Nelson down, but Jorel’s quickly in with a side headlock before Fletcher shrugged off some shoulder tackles. Kyle kicks Nelson in the midsection, but couldn’t avoid a slingshot spear as he tried to catch Nelson who landed a leaping shoulder tackle seconds later, then a leaping double knees into the corner. Royce Isaacs tags in and caught Fletcher in the midsection ahead of a Nelson pounce, but it’s good for just a one count. Fletcher avoids a knee from Nelson, but couldn’t avoid Isaacs’ Dragon screw as Mark Davis came in to break up a double team suplex only to take it himself seconds later. A gamengiri from Fletcher stops Nelson on the top rope as all 4 men spilled outside, leading to a pair of back suplexes onto the apron from Aussie Open. Back inside a Fletcher PK and a Davis back senton led to a lackadaisical two count on Nelson, who was then grounded with a chinlock. Nelson broke free, but gets slammed and rolled away from a back senton only for Fletcher to tag in and charge Isaacs off the apron. Chops keep Nelson cornered ahead of a superplex attempt, which Nelson bit away before a big crossbody off the top cleared half the ring to take down Fletcher. An assisted Dominator from the challengers almost get the win, as Davis dove in to break up the pin before the Aussies escaped duelling German suplexes and hit back with stereo brainbusters. Nelson ducks out as the Aussies hit each other with forearms, as things began to hit the final stretch with Davis taking a dragon screw before a pop up powerbomb and slingshot Death Valley Driver onto the knees almost got the win. Fletcher escapes a suplex seconds later then cracked Nelson with a superkick as Isaacs took a Dental Plan then an assisted Aussie Arrow for a near fall with Nelson breaks up the pin. Jorel’s thrown and dropkicked to the outside as Isaacs is left on his lonesome for some forearms before a Coriolis got the win. 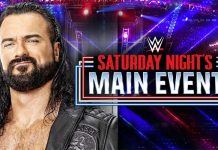 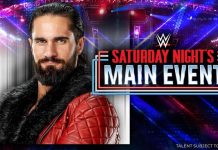 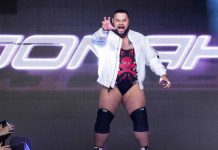 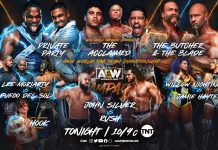