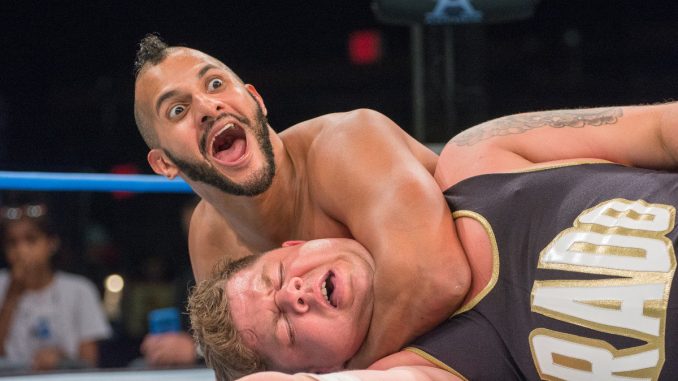 IMPACT Wrestling’s Rohit Raju recently spoke with Andrew Thompson of PostWrestling.com. Here are some highlights from the interview:

Rohit thinks Ethan Page is one of the best businessman in pro wrestling: ” “I use Ethan Page [as an example]. He’s such a… to me, he’s one of the best businessmen in professional wrestling. He has — with his vlogs, he has a great rapport with fans, people wanna know what he’s doing, they pay attention to what he’s doing and he has turned it into a business and now he’s making money off of wrestling, and he has his own promotion, he’s one-half of the current IMPACT Tag Team Champions which they’re a great tag team. So he knows how to play the game.”

The ups and downs of Desi Hit Squad/Confirms Raj Singh knee injury: “The Desi Hit Squad has been a real weird journey. I love being at IMPACT. I never thought I would be there. There was a time I was working a 40 hour — actually it was 45 hours a week at my job, full-time job, trying to wrestle, using all my vacation time for wrestling, and I’ll never forget when Scott D’Amore was like, ‘There’s no way you’re gonna make it. You can’t do both,’ and I said, ‘Well I’m at least gonna try’ and I ended up winning the Global Forged thing and then, I stepped down at my job or whatever and I wrestle now. So it’s such a good feeling that, like you were saying, staying the course and making it. When I first got there, I was Hakim Zane and they wanted to do something with an Indian group and I think they had the plan, but the execution just wasn’t there. So they announced all these people who they had planned being in the Desi Hit Squad but, they didn’t have anybody, and one of the people they announced was green as green. He was still having to train. He’s still training, Bhupinder [Singh], really good. He’s only been wrestling for like a year. He’s had a handful of matches and I’m sure you’ve seen him on TV, really good kid. Super green, but man, he’s gonna be phenomenal. He’s gonna be phenomenal when he’s done. They’ve got Gama, they didn’t have Raj [Singh] at the time and [they] had signed Gursinder, but nothing was official, and then they had me. So it ended up just being me at first, and they had me as a babyface, and then I don’t think they really knew what they wanted to do. They brought in Gursinder, and then we ended up being a heel tag, and it was weird because I was a babyface one week and then the next week we had recorded stuff and I was teaming up with him and we were heel, and it was rough at first because all the tag teams that were in IMPACT at the time had been working together for years, and then [Gursinder] and I get together and we’re trying to figure out each other’s style, how the other one moves and all this stuff and he lives in Toronto and I was in Michigan and we were pretty far away so we didn’t have a place to meet. We were trying to get booked on shows together so we could get more ring time, and then we started to gel a little bit and then he ends up leaving. He ends up leaving so it was just like, ‘Okay, well there’s that’ and then they bring in Raj, and so we’re right back to square one and then Raj and I have to learn how to gel, and Raj, he was out for a while. He was trying to get in the WWE at the time. He wasn’t really wrestling, he was trying to keep himself healthy, but he wasn’t getting any ring work so he has to knock the ring rust off so at this time, we’re trying to work and literally the first time he comes in the ring, he gives me the gut buster and when he pressed me, he blew his shoulder out, and it was in New York when I was wrestling Gama. So, we’re already limited there so we’re like, ‘Man, what a freak accident.’ So we’re trying to gel and so, they’re not gonna get behind us until we start gelling so we’re pretty much IMPACT job guys at the time trying to get experience and trying to gel as a tag team and then we finally started to gel a little bit.

We had the thing with The Deaners, which was cool. That was fun, and then we finally started to gel and again, we were up and down, up and down, up and down and then they brought in [Mahabali] Shera. So that was cool, and now, finally, we’re really starting to build some momentum then of course Raj gets hurt. His knee is jacked up right now so he’s out, so now it’s Shera and I. So now, Shera and I are trying to figure out how to gel. So it’s like man, its never really taken off. As soon as it starts to take off, something happens and we’re right back to square one so its been more lows than it has been highs.”

Talking with Monty Brown about the TNA Wrestling show in April: “I honestly would just love to get mic time against Monty Brown. I hope Monty comes back. I talked to him, I told him about it. I don’t know what’s gonna happen, I hope they get him. Monty and I stay in the same city so I’ve known him for quite some time and he’s been a big help in my career as far as just giving me pointers but I think he’s a very underrated wrestler as far as — especially his promos. A lot of people don’t remember his promos and his promos were some of the best in wrestling and I don’t think he gets a lot of credit for what he was doing back then, and the man is still as big as a house. Huge! Just a giant of a man so, I hope he goes back and I hope he cuts a bad ass promo, lights it on fire and people are like, ‘Man, Monty Brown… he’s awesome.’” Rohit is asked if Monty is interested in coming back, “That I don’t know. I know Monty and anytime I see him and we start talking wrestling, his eyes light up. You can see that fire in him so I don’t think it ever goes away. I don’t know. I can’t speak for him on that part. I have no idea. I just hope he does as a fan, and also, I hope he does because that was the guy that was doing the pounce before everybody else was so let’s give credit where credit’s due.”