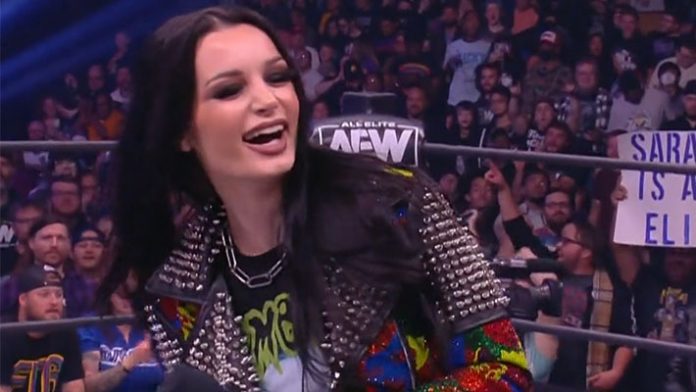 Saraya, formerly known as Paige, delivered her very first in-ring promo for AEW during this week’s episode of AEW Dynamite.

Saraya stated that she is broken but not damaged, and that she plans to make changes to the women’s division of AEW. Toni Storm, the current interim women’s champion, was one of the women that Saraya introduced from the back.

During Saraya’s praise of Storm, Britt Baker and her group interrupted, cutting her off.

During Saraya’s praise of Storm, Britt Baker and her group interrupted, cutting her off. Saraya stated that she had a conversation with the President of AEW, Tony Khan, and added, “it’s so good to have a boss to actually finally listen to me.”

Saraya announced a lumberjack match between Storm and Serena Deeb.

During the match, Saraya was providing commentary, and Storm was ultimately victorious.

It's just been made official: the #AEW Interim Women's World Championship Match between Toni Storm and @SerenaDeeb will now be a Lumberjack Match! Tune in to #AEWDynamite LIVE on @TBSNetwork! pic.twitter.com/3It0Cgr1Lw