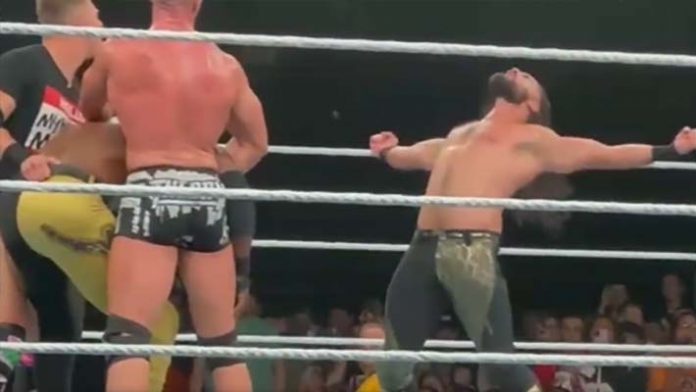 At a WWE live event that took place over the weekend in Bismarck, North Dakota, Seth Rollins, Austin Theory, and The Miz did their best impressions of members of The Shield.

During the main event, Street Fight, the three men used the famous hand pose used by the Shield, which resulted in loud boos from the fans at the Bismarck Event Center. The match was against Bobby Lashley, Dolph Ziggler, and Kevin Owens.

After striking the pose, they set Lashley up for a Shield Triple Powerbomb, with Rollins making fun of the booing crowd by yelling in a Roman Reigns impersonation as the move was delivered. As Rollins prepared to put his weight on Lashley, Ziggler struck him with a superkick from behind. The victory went to the babyfaces, by Lashley pinning Theory.

UFC veteran Daniel Cormier will be the referee for the Rollins vs. Matt Riddle fight that will take place in the Fight Pit at Extreme Rules.

Click here for full WWE Saturday Night’s Main Event results from Bismarck, ND. You can watch a clip from the event below: