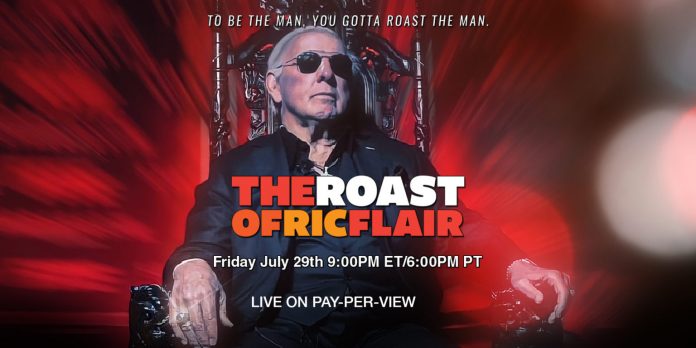 The Roast of Ric Flair will feature a number of top names.

Just two days before wrestling in what is being billed as his last match, WWE Hall of Famer Ric Flair will be roasted and honored by the stars on Friday night from the Nashville Fairgrounds in Nashville, Tennessee. Flair is set to team with son-in-law Andrade El Idolo to take on Jay Lethal and WWE Hall of Famer & Senior Vice President of Live Events Jeff Jarrett.

The following names have been confirmed to either appear live on stage or via video at the Roast, however there’s some surprises too:

– Sportscaster Brad Nessler will be the Roast Master

– Actor/comedian Chevy Chase, who will not be live in Nashville

Due to prior commitments, WWE Hall of Fame celebrity Mike Tyson withdrew from the Roast a few weeks ago. Due to COVID-19, comedian Corey Ryan Forrester withdrew this morning.

There will also be a few surprise roasters there.

Here is a promo for Flair’s roast: