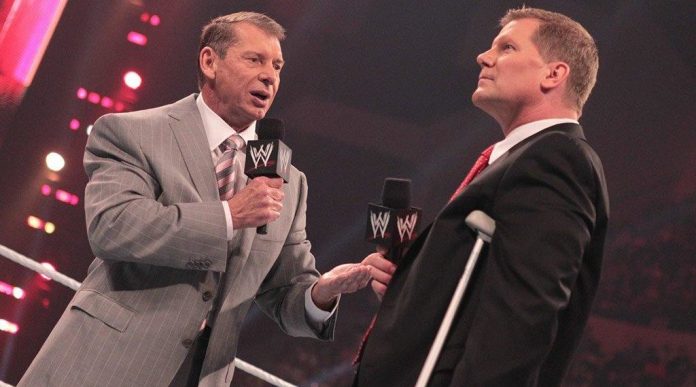 The fall of the Roman empire is the story of an entity that got too big for itself, became too big to manage, and after it was invaded then the empire eventually crumbled.

Yesterday, shock waves hit the sports entertainment world when the Wall Street Journal published a story that the WWE Board of Directors were investigating claims that the owner, Vince McMahon agreed to pay a former employee $3 million in January to stay quiet after an affair he had with her last year. The story detailed that an alleged friend of the former employee had sent an e mail to board members to inform them of not only the payoff, but that Head of Talent relations, John Laurinaitis was also involved with the employee before her departure from the company earlier this year. Supposedly, the investigation, which started in April, already under covered other non-disclosure agreements with former female employees in the past that were paid to stay quiet about activities with McMahon.

As sleazy as it might be, it’s not exactly shocking that a wealthy businessman might’ve paid to cover up an affair, and as long as the relationships were consensual and nothing criminal happened, the only consequence is the negative publicity.

However, the fact that the WWE is a publicly-traded corporation, the same status that allowed McMahon to become a billionaire, the consequences for the company and McMahon personally could be much bigger in the grand scheme of things.

Keep in mind, while offering an IPO dramatically increased WWE’s value as a global entity, it also gave the company a responsibility to its shareholders. The organization has to theoretically be above board for the investors to have full disclosure of what they’re putting their money into, regardless of how silly that might sound for the wrestling business, an industry that doesn’t historically have a track record of ethical standards.

The situation is still developing and much of the result of this scandal will depend on what exactly the independent investigators that represent the board find out with the entire scenario. On the surface, it’s possible that Vince could be ousted from his own organization, but I doubt that will happen. At the same time, the Wall Street Journal story reported that the former employee was given a raise after she began her relationship with McMahon, and if that’s true then it’s very possible that the board could find that McMahon used company funds as an incentive for the employee to begin the affair. If company funds were used in any form of fashion during the relationship, it could be disastrous for McMahon. Again, this portion of the story has nothing to do with the personal embarrassment of the affair being revealed, but rather the potential deception of the investors as to what the company funds were used for under his direction.

It’s important to note that the former employee hasn’t claimed any forceful activities, and the relationship appears to have been consensual so there’s not any criminal charges involved in the situation.

That being said, the misuse of company money to either give a raise as an incentive for an affair or the payoff for a non-disclosure agreement have taken down bigger titans than Vince in the business world. Granted, we’ve heard stories of payoffs in the wrestling industry, including for McMahon for years. As long as criminal charges weren’t involved then the incidents were swept under the rug because the problems ended there. In this case, the fact that WWE is a publicly-traded corporation makes it clear that even Vince McMahon has to answer to someone for this, which is the board of directors.

McMahon’s longtime and high-priced attorney, Jerry McDevitt already went to work on this, making a statement that WWE’s money wasn’t paid to the former employee. All things considered, I can’t imagine that Vince would’ve conducted an affair without all the bases covered, in terms of legal protection from anything that could’ve affected his status within the WWE. It seems too obvious of a mistake to get an employee a raise directly after an affair started, but perhaps McMahon thought his sports entertainment empire would offer him protection. from any public consequences. Still, I’d expect that the slick attorney, McDevitt made sure that nothing could be tied to the company as misuse of funds.

Another aspect of this scenario was that the non-disclosure agreement was signed in January and the investigation started in April so you have to wonder if Stephanie McMahon’s hiatus from the organization had anything to do with this. Surely, she can’t be happy that her dad had another affair after being with Linda for decades. Ironically, this isn’t the first time that Vince admitted to infidelity publicly because he discussed the topic during a Howard Stern interview in 2001.

Obviously, someone is going to have to take the fall for this scandal.

If I had to guess, I’d say that John Laurinaitis will resign from his position as the Head of Talent Relations to take the heat for it and the company can publicity proclaim that they took action based on the corporate misconduct. The 60-year-old Laurinaitis will quietly get a decent severance package to stay quiet and retire from the industry.

Again, as long as it can’t be proven company money can was used for the transactions or incentives then this will be reduced to an embarrassing personal situation for McMahon. After Laurinaitis gets his pink slip, Vince will endure the negative publicity before the company continues it’s normal business, mostly because of the major amount of guaranteed and that translates to profit for the same stockholders that the board represents in this situation.

As of right now, the biggest takeaway from all of this is that the WWE could potentially be run without any McMahon involvement, something that was unthinkable in the past. If Vince didn’t outlive us all, it was assumed for years that Stephanie and Triple H would takeover the company. Who knows, the company could’ve continued to be passed down through the McMahon family tree until Wrestlemania 205, but depending on the aftermath of this scenario, maybe Nick Khan emerges as the leader of the corporation, considering that he made the biggest moves for the company in recent years.

Finally, it must be mentioned that while Vince McMahon has tried to make the image of professional wrestling more mainstream for decades by packaging it as sports entertainment, the business that started on the carnival circuit is still as carney as ever because the 76-year-old billionare owner had to pay off a former employee to cover up an affair to avoid negative publicity for the company.