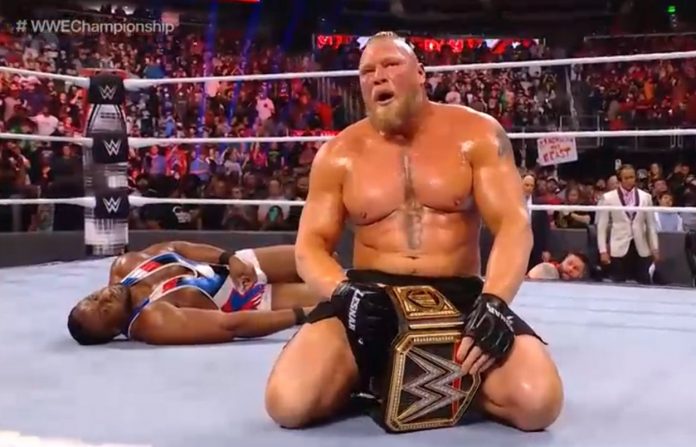 Ironically, I penned an article last week about the WWE Day One pay-per-view and mentioned that the show highlighted a lack of star power on the roster, and discussed the potential impact of recent COVID numbers in the country. Unfortunately, both of those situations materialized, as Roman Reigns announced on social media just hours before the broadcast that he tested positive for COVID and wouldn’t be on the show. Obviously, I hope Roman gets well soon, as he’s a very talented guy that was booked in a tough spot for the majority of his WWE tenure, and by all accounts, he’s a great guy outside of the ring. However, as I wrote last week in this column, one of the reasons that the hype for this show that was more of a PR move for the corporation than a substantial sports entertainment show was that the company makes it blatantly clear with the lack of attention to detail on the majority of the product that if it’s not Roman Reigns or Brock Lesnar, there’s undoubtedly a lack of importance to the presentation. Well, with Roman out of the Universal title match, not only was the featured match on the event, which was promoted more prominently on television than anything, off, but there wasn’t anything specific for Brock Lesnar to do because he was only been paired with Reigns in recent memory. Too often, too many of the roster are presented as interchangeable parts of the WWE machine, and when there’s such a noticeable divide between the importance placed on Roman as compared to the next tier of star power on the roster, the lack of star power becomes even more apparent when there has to be some type of replacement.

The Usos beat The New Day to retain the belts, and while the bout had good action, it was basically the same match you’ve seen between the two teams for the past several years. There wasn’t enough time between bouts for this to be portrayed as “revisiting the rivalry” so it was basically just a retread of something the audience already saw prior to this show. Another aspect that was seen here and throughout the pay-per-view was that since the Roman/Brock match was cancelled, there were only six matches on the main card so in order to stretch the show, there were a few bouts that were given more time than they needed to get the narrative across to the audience. Considering it was an opener, The New Day/Usos bout going near the twenty minute mark was less of a hot start to the show and more of a contest that went about five minutes too long so it dragged near the conclusion.

On the flip side, the Randy Orton/Riddle vs. Street Profits match was a fresher tag title match and possibly could’ve used the extra time that was given to the opener. This match was fine and there wasn’t anything wrong with it, but it went about ten minutes without getting into second gear. After Orton and Riddle retained the belts, the title match that was built up for a few weeks with the tournament on television seeeds like just another match on Raw instead of a pay-per-view caliber bout. Again, that’s not to say anything was terrible in the match, but it was more or less just the average television bout.

Drew McIntyre defeated Madcap Moss in about eight minutes for what was completely a television match that the audience had very little reaction to despite Drew’s status as one of the best workers in the company. I’ve said it before and I will say it again, management did Drew a total disservice with how they presented him during the bulk of his title reign and have completely misused him since he dropped the belt. I doubt Madcap Moss has the skills to be anything more than a mid-carder in the WWE, but with the gimmick of being Happy Corbin’s sidekick, he’s just a notch about The Red Rooster in terms of if it makes a difference to the audience if he’s in the ring or selling popcorn in the crowd. Drew is a former champion and theoretically one of the main stars of the brand. The character of Madcap Moss shouldn’t even be in the ring with the McIntyre persona, but if he is, Drew should hit two moves and win the match. The crowd had zero reaction to the contest, and the only thing that this bout accomplished was that it made Drew look like less of a star. Reportedly, McIntyre might be injured, which would further hinder his momentum. I’m not sure if or how management can rebuild the hype around Drew, especially if an injury puts him on the shelf for an extended period of time, but either way, he deserves better than matches against Happy Corbin’s sidekick on pay-per-view.

As I said last week, I didn’t think much of the Edge/Miz feud because while it’s nothing against The Miz, if management doesn’t have something better for Edge to do than to feud with him then he should just stay home until they find a major opponent. Edge was medically cleared and is in great shape, but the fact remains that at 48 not only does he have a shorter window as an active wrestler, but you would think that given his age, his body has a limited number of big time matches left in his current run. Since Edge’s return as an active wrestler after nine years away from the ring because of a neck injury, he had a level of mystic around him when he appeared on television, but that mystic diminished greatly throughout this feud. The office tried to use the brood gimmick on Raw last week and the entrance at the pay-per-view to add some sizzle to this rivalry, but it didn’t have the same effect as it did during the Seth feud because the fans have already seen it. The match almost went twenty minutes and dragged a lot with zero crowd reaction. The return of Beth Phoenix got a pop, and seemingly, this will set up Edge and Beth vs. Miz and Maryse, but is there really a demand for that? It’s easy booking, but is that the best use of Edge? Edge got the win, but I wouldn’t be surprised if this feud continues until Wrestlemania.

Becky Lynch and Liv Morgan had a solid in-ring match, but again, the crowd was nearly non-existent for most of it because it was obvious to everyone in the building that Liv wasn’t going to win the title, which goes back to the fact that the WWE has a few pushed stars, and the rest of the roster is just used to occupy the other spots on the card. The narrative is there for an angle that could make Liv an established star in the process, but unless management wants to give her a run with the title than the impact of the well-done video package to hype the match is moot. Furthermore, if the office does actually plan for Liv to eventually win the title, there are diluting her potential success with too many defeats in title matches before it. A wrestler can only lose so many times in title matches before the audience loses faith that they will actually become champion.

The main event got the biggest crowd reactions of the night by far and speaks volumes to how over Brock can be, while pointing out how one-dimensional the product is today. It’s clear to the audience, Brock is the star and the other wrestlers are just in the match to take the suplex. Don’t get me wrong, the WWE has a tremendous amount of talent on its roster, but the product isn’t well-rounded at all because of the cynical nature of the booking. Edge brings star power to the table so let’s book him against The Miz because that will get heat, right? Let’s make Bobby Lashley, the heel, have to beat three wrestlers in one night on Raw to get into the title match because a heel should always have to overcome the odds, right? Drew McIntyre carried the company on his back during the pandemic, but feuded with Jinder Mahal and Happy Corbin since then because that’s money, right?

Brock winning the title was more or less the only option if he was going to be put into the match because otherwise what’s the point? That being said, unless this is somehow used to set up an impromptu unification match with Reigns at Wrestlemania, Brock winning the title again does absolutely nothing for the Raw brand. If Lesnar drops it before WM to resume a Universal title feud with Reigns, what does it really accomplish? Management has played the Lesnar card to the point that him winning another title doesn’t provide the boost that it originally did. All things considered, it looks like Brock vs. Roman will be the main event of one of the nights of Wrestlemania, the same match that was the main event of the show at Wrestlemania seven years ago so what does that say about the ability of the WWE to make legitimate money-drawing stars for the company?