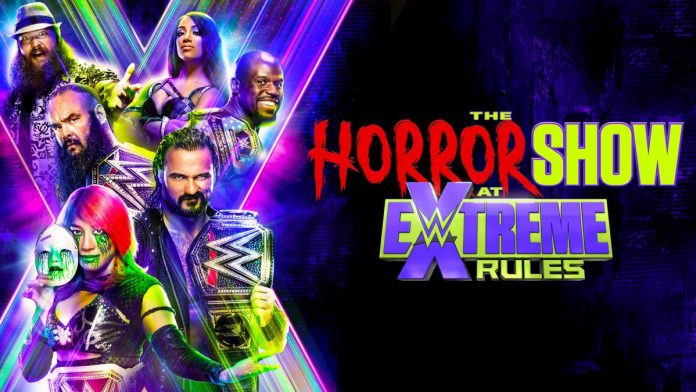 Professional wrestling isn’t cool anymore, and the Extreme Rules pay-per-view was a direct example as to why the industry hasn’t been anything close to trendy in over 15 years.

Ironically, the under card of this show had some solid matches, including Asuka/Sasha Banks, and it should be noted that even in the pandemic phase of the industry without a full crowd, Asuka as a performer has really been an MVP because she can make any scenario work. Another example was The New Day vs. Cesaro and Nakamura in a tables match. With as much as Cesaro and Nakamura could’ve been bigger stars individually, their styles mesh together very well for the team. Obviously, it goes without saying that The New Day are one of the most solid and entertaining acts of their generation. It really can’t be understated how valuable it is for the company to have performers like that on the roster.

However, the Extreme Rules pay-per-view will be remembered for anything but good wrestling.

The original angle where Seth Rollins injured Rey Mysterio’s eye made sense because theoretically, the sharp corner of the steel steps could injury someone’s eye. WWE brass jumped the shark when they promoted an “eye for an eye” match because they confirmed the way to win was to “gouge out the opponent’s eye” Obviously, everyone knows that nobody is actually going to lose an eye, and the only anticipation it built for the contest was that fans were anticipating some type of dumb stunt at the finish.

Unfortunately, the writing team made sure to deliver on that.

After a good in-ring match, Rollins put Rey’s eye near the steps the same way he did for the initial injury spot, and without much actually happening, the bell rang with the announcers claiming, “the eye is out.” As Rey clutched his face, he held an obviously fake eye ball near his mask, attempting to imply that his eye was taken out of the socket. Of course, Rollins threw up post-match because we all know from the infamous Beyond The Mat segment that Vince enjoys that type of humor. So, Rollins is vicious enough to want to gouge out Rey’s eye, but can’t handle the sight of it afterwards? Doesn’t that take away from the vicious streak the stipulation tried to get over?


Listen, this is rather simple, but I think it must be discussed because it’s the basis of why the industry hasn’t and won’t approach a pop culture boom any time soon. The use of a stipulation that the company can’t actually deliver on and an obviously fake eye ball are so lame that it gives viewers a reason not to invest their time in the product. The fake eye ball and the notion that Rey lost an eye in the process is so phony that it insults the viewers watching the show. Keep in mind, pro wrestling is at least based in reality and some of the most successful performers in history didn’t have to stray too far away from that ideology. Point being, is the general public going to be drawn to the phony eye stunt? Remember, diehard fans watch the product anyway, but WWE’s goal is always to market to the biggest demographic possible. The bottom line is, when angles or gimmicks are so phony that it’s insulting to watch, that’s exactly why the casual fan only tuned in when the stars of the past are booked for the TV shows. Why did the Raw Reunion show draw the highest rating of the year in 2019?


Granted, there are several reasons for that, but the WWE’s inability to properly push a baby face or make stars with the 50/50 booking philosophy that often doesn’t get anyone over are only a part of the problem. On the most basic level, if professional wrestling is too phony, the general public rolls their eyes and changes the channel. Stone Cold Steve Austin drew record-setting TV numbers in the late-90s because he was authentic and the audience could identify with him. Sure, Austin wasn’t really tormenting Vince McMahon every week with the zamboni and several stunners, but as a character, Stone Cold was believable because he was actually a gritty Texas that clawed his way up the ranks to wrestling stardom.

The casual fan tunes into Raw, sees the angle with the fake eye, and labels the modern product lame, which is why a major portion of that demographic only watches when the stars of the past appear on TV.

If you’ve read the other articles I’m written about attempts at “cinematic” wrestling, you know that I absolutely despises the concept because it’s nothing close to pro wrestling and it makes the rest of the product look fake. So, I have to ask, what was the swamp fight at Extreme Rules? Were fans supposed to believe that Bray and Braun were actually fighting in a swamp? Was Braun fighting himself supposed to be real or some type of dream sequence? The presentation was as goofy as when Hulk Hogan saw Ultimate Warrior in a mirror in WCW, but Eric Bischoff couldn’t see the same thing that Hogan and the fans saw on-screen. Furthermore, how are the fans supposed to believe in anything else they see from the product when a phony swamp fight with lame special effects was presented on the same show? It goes without saying that this debacle did nothing to help establish Braun as a credible champion, the same way that Drew saying that he doesn’t want to defend the championship a few times since his Wrestlemania title win did nothing to get him over as the top guy. Drew told Big Show he didn’t want to fight him, said to Rollins that he didn’t want to fight, but would if he had to, and more recently told Heath Slater he wouldn’t fight on Raw. How does any of that put Drew over as champion? The baby face champion shouldn’t back down from a title defense. As much as Terry Bolea is a scum bag, did Hulk Hogan ever back down from a challenge? Did Stone Cold ever hesitate to fight?

The success of sports entertainment is based on human psychology, which is why the genre has continued for decades, because there are fundamental elements that draw an audience within the pro wrestling narrative. If the writing team has to camouflage an angle with fake eyes or a goofy swamp fight, maybe they should try to build a better angle that has substance with characters that are over instead of lame gimmicks. All that being said, the point is mostly moot because the guaranteed money from the TV deals secures the WWE with record-setting revenue for the next five years so there’s nothing to make them change the philosophy for the company. At the same time, they might be trading the short-term money for building the future because the ratings show even the core audience has declined and the booking of the modern era hasn’t made stars for the future of the industry.