During the broadcast of Wrestlemania VI in the Sky Dome in front of over 60,000 fans in Toronto, commercials were played to hype the 1991edition from the Los Angeles Memorial Coliseum, a venue with over 100,000 seats. The event was eventually moved to the LA Sports Arena, a venue with just over 15,000 seats, and reportedly had to paper some of the house to have a sold out show. The reasons for the move have been subject to speculation and debate, as the company cited security concerns because of the tension involved in the storyline that saw Sgt. Slaughter, a former American baby face character, become a trader to represent Iraq during a time when the Gulf War made the news. The Wrestling Observer’s Dave Meltzer claimed that poor ticket sales led to the switch. I’m just guessing, but I’d say the move to a smaller venue had more to do ticket sales than security concerns. Up until this point, the WM brand had been a sure thing for the company, as they drew sellouts each year since the event began, including the previously mentioned 60,000 fans in Toronto when the 100,000-seat building was advertised in LA. Truth be told, The Ultimate Warrior, who won the belt from Hulk in 1990, didn’t exactly have a stellar reign as champion and his matches never improved beyond his iconic comebacks or when he had an opponent that he could him look good in the ring. As WCW proved in 1998, as tremendous as Hulk/Warrior was at WM VI, it was a basic match that could only be done once. Rick Rude already worked with Warrior on a few pay-per-views so another rematch wasn’t necessarily going to be a draw for WM. Plus, Warrior was notoriously difficult to deal with so as a company, it’s possible they didn’t want to continue to bank on him as the top guy. The point being, the switch to Slaughter at Royal Rumble and then set up for the bout with Hogan was just two months before WM 7 was scheduled to take place so management would’ve known before that if tickets were selling with the possibility of Warrior as champion.

The opening bout of The Rockers vs. an early version of the Faces of Fears with the team of Haku and The Barbarian was a solid opener with a lot of fast-paced action. This formula of The Rockers vs. a bigger heel team was used regularly at these type of major shows and it usually proved to be a wise booking decision as The Rockers bounced around for their opponents. At the same time Haku and The Barbarian were agile enough to keep up with Shawn and Marty so there’s some fun spots in this bout. The Rockers got the win. The Texas Tornado beat Dino Bravo and in a mostly nothing match, but since this is Kerry Von Erich’s only WM match I wanted to take the time to discuss some of his WWF run. In truth, the story of his time under the WWF banner was hindered by the same reason the rest of his career was somewhat underwhelming at various points. Kerry Von Erich without question had all the tools needed to be a major star in the industry, which he definitely was in Fritz’s World Class promotion. He had the look, the charisma, and the baby face fire to have some incredible performances that had the fans emotionally invested in his matches, which is the true key to drawing money. Many people have said in interviews that Kerry Von Erich was a really nice guy and that’s what makes the whole situation surrounding his death even more disappointing. As was the case for some of his career in the latter days of World Class, including its collaboration with the AWA to attempt to stay a float, drug problems continued to plague the Texas Tornado throughout his stint in the WWF. How far Kerry could’ve went as either the NWA champion or in the WWF if he didn’t have those personal problems would’ve been very interesting because again, he had all the skills to be a major star.

I didn’t expect much from the British Bulldog/Warlord bout because I can’t recall too many classic Warlord contests, (no offense went to Warlord) but this was a decent match that saw the Bulldog get the win. A match that was about as subpar as I thought it would be was the Earthquake/Greg Valentine confrontation, as Earthquake more or less squashed Valentine in just a few minutes. For some reason, “The Hammer” used elbows for roughly 95% of his offense in this lackluster meeting. Speaking of squash matches, The Undertaker beat Jimmy Sunka relatively easily, which made sense because The Undertaker was a new project at that point, and Snuka’s best days in the ring were clearly behind him. The comparison of these one-sided matches are that Undertaker’s dominate win was structured to have a definitive purpose to push one of the competitors, but Earthquake’s victory seemed to be more of a cluster to waste time. The final squash match on the card was The Mountie’s quick win against Tito Santana in roughly two minutes so there’s not a lot to take from it.

The Nasty Boys won the WWF Tag Team titles when they beat The Hart Foundation. Granted, the Nasty Boys rightfully get a lot of criticism for their sloppy and sometimes dangerous style, but the effort was there for solid matches, as they bumped all over the place to make the baby faces look like worthy champions here. It was a good match, but more than the actual content of it, the results of this were a definitive shift in the career of Bret Hart, who would soon move up the ranks toward the IC title in the next year. One of the fun things about watching these Hart Foundation matches is that you can see the skills of Bret and how he would later transition that ability into a main event style with longer matches and more detailed story telling at the top of the card. Another fun match was Jake Roberts vs. Rick Martel in a blindfold match. The stipulation was based on an angle where Martel sprayed Roberts in the face with the perfume, and while it could’ve been a gimmick match that limited what could be done, these two got the most mileage as possible from it with Jake using the crowd to help him “find” Martel in the ring. When Jake was at the top of his game, his work was very entertaining to watch. Roberts got the win and smashed the perfume bottle as revenge against The Model.

The retirement match of Ultimate Warrior vs. Randy Savage was a classic example of sport entertainment drama. As mentioned earlier, the Warrior needed someone that could make him look good and that’s exactly what Macho Man could do. This bout worked because it had the two elements that could maximize Warrior’s limited in-ring ability, the Warrior brought his charismatic intensity, and Macho could take the great bumps to enhance the presentation. Warrior kicking out of five elbows from the top was a little ridiculous, but it was used to benefit his character. Eventually, Warrior pinned Macho to send him into retirement for as long as pro wrestling retirements usually last. The selling from Savage after the bell is really top notch because he makes himself look like a sympathetic figure before Sherri starts to kick him when he’s already down. One of the many reasons this segment is so memorable is because Ms. Elizabeth, who was sitting in the audience and was never known to actually get physically involved in matches, ran to the ring and threw Sherri through the ropes to save Macho Man. Obviously, their reunion was one of the most emotional moments in wrestling history and it had people crying in the audience, which is rare and proof of how over they were because the fans had an emotional investment into Macho and Ms. Elizabeth.

It was cool to see Tenryu on the card, but this tag match of him and Kitao vs. Demolition was awkward and clunky. I’m not sure if there was miscommunication or botched spots, but Kitao looked like he had no idea what was going on in the match and the other three more or less had to work around him. The Legion of Doom vs. Power and Glory went about thirty seconds so it wasn’t really a match, but hey, if these guys got a WM payday for it then good for them. That being said, I think there’s two teams could’ve had a good match if they were given the chance on this stage. Virgil beat Ted DiBiase via count out in a contest that was basically all DiBiase trying to make the match at least decent. Virgil threw the same series of punches repeatedly throughout the match and this contest was nothing special. Boss Man vs. Mr. Perfect had some good action, but the DQ finish was rather underwhelming.

The main event wasn’t anything spectacular as far as the in-ring action, specifically because it was a rather slow pace for a bout that went almost 25 minutes. But, this is another example of the moment being more important than the match because the result of a bloody Hulk Hogan posing with the championship was the payoff of the angle. 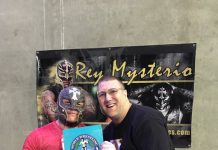