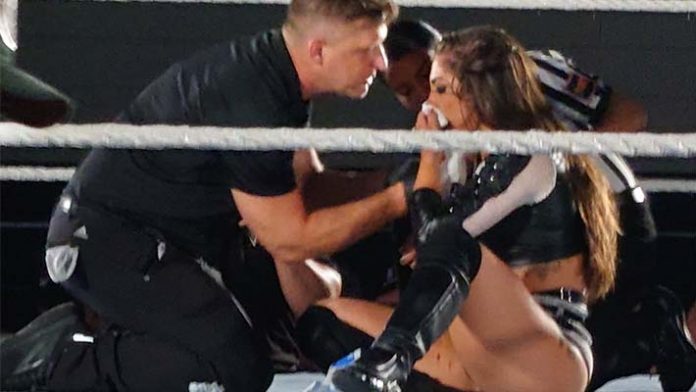 On Saturday evening, another WWE talent suffered an injury.

At the NXT live event in Gainesville, Florida, Sloane Jacobs and Tatum Paxley worked a singles bout. After Tatum took a kick to the face and her chin crashed on the ring post, the match was called off early.

After attending to Tatum, the medical crew called time on the match. It appears she may have broken her nose, as can be seen in the photos below.

Prior to making her NXT debut this past February on an episode of NXT Level Up, Paxley inked a contract with WWE in August 2021. She teamed with Ivy Nile to defeat Fallon Henley & Kayla Inlay.

Carmella appeared to have been injured at the WWE live event in North Charleston, South Carolina, as PWMania.com previously reported.

We wish Paxley all the best. Stay tuned to PWMania.com for more.

Here are some photos of the incident courtesy of Twitter user @JeffReidUP:

#NXTGainesville Unfortunately we didn't get to see much of @TatumPaxley in action due to an injury. Hopefully it's not too serious. Special thanks to the official for quickly calling off the match. pic.twitter.com/5FmOiN7XHu