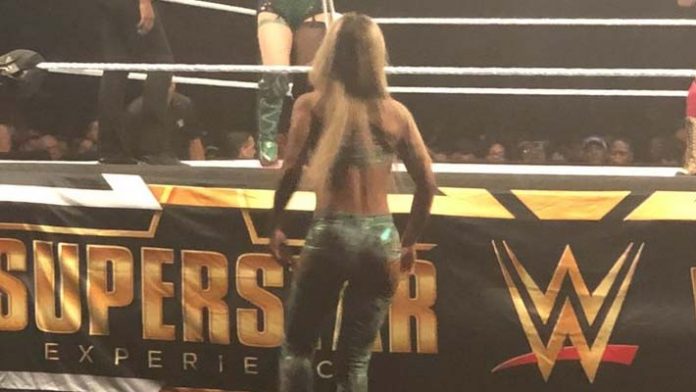 Fans at the live event in North Charleston, South Carolina are reporting that Carmella appeared to have been hurt during her match, though WWE has not yet confirmed this.

In a Triple Threat Match, Bianca Belair faced off against Asuka and Carmella to defend her RAW Women’s Championship. However, early in the match, Carmella was sidelined due to an incident.

On Twitter, a fan who attended the match claimed that Asuka and Belair stalled when Carmella left the ring, and that soon after, the referee flashed the “X” sign to indicate that Carmella was injured.

According to reports from the venue, Carmella’s injury occurred after she struck her head in the ring’s corner when Belair attempted a backflip. The good news is that Carmella was able to walk to the back under her own power. “she got up on her own to walk away which is good, but they were like shielding her eyes from the bright lights,” @sashasliv posted on Twitter.

Corey Graves, Carmella’s husband, expressed his displeasure with hearing the news via Twitter and tagging WWE. He later removed the tweet.

Carmella has our warmest wishes and we wish her a quick recovery. Stay to PWMania.com for more.

Here are several tweets from Twitter user @sashasliv who was at the event:

carmella got out of the ring at the start of the match and wouldn’t get back in, so asuka and bianca kept calling her chicken and did a funny little chicken dance so the audience keeps chanting chicken to carmella 😭 #WWENorthCharleston pic.twitter.com/JhSKZ3mOi0

she got up on her own to walk away which is good, but they were like shielding her eyes from the bright lights #WWENorthCharleston

bianca won though obviously, but the ending was a little weird since like no one was paying attention at that point #WWENorthCharleston pic.twitter.com/Im2xKBUNpZ