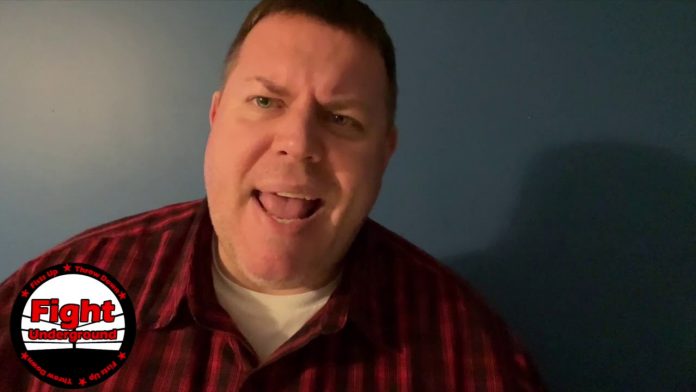 “The ring had moved to a family member’s house at the top of a hill in the woods. I would train in the afternoon and then go to work in the evening with the tan lines of elbow pads on my arms.”

That statement is something that you will only hear uttered about the genre of professional wrestling, the zany and off-the-wall entertainment venture that remains a staple of the American sports circuit several decades after Gorgeous George brought it into living rooms in the 1950s through the once-new technology of television.

However, all the glitz and glamour that George brought to the ring as he strutted along with pins in his hair and inhaled “Imported Florida Air” before the opening bell, is only a slight peak at the overall scope of sports entertainment. In an age of streaming services that can beam professional wrestling from the other side of the globe live though the fans’ screen, sometimes it’s easy to forget that the minor leagues before the big time are a path littered with dirt-stained canvases, meager pay, and sometime sparse audiences.

What motivates someone to willingly put themselves through these shenanigans of local level professional wrestling?

Dash Bennett, a native of Pittsburgh, PA and originally from a small town in West Virginia, walked in a crowded auditorium nearly four years ago as “Pomp and Circumstance” blared in the background. No, he wasn’t channeling “Macho Man” Randy Savage, who hooked him on the sport when he saw the Slim Jim pitchman rant and rave about an upcoming cage match in 1995. Instead, Bennett “walked the aisle” to receive his Master’s Degree in Business Administration from Penn State University, where he previously completed a Bachelor’s program in business a few years earlier. That higher education landed him work that took him on business trips as far away as England and The Philippines. He cites traveling in business class overseas as one of the major perks of his decision to hit the books during his studies.

In an ironic dichotomy, he spent the 15 years prior to his university exploits cramped in cars with as many passengers as possible, ate whatever late-night gas station food he could find, and chipped away at his path as an independent professional wrestler.

“I traveled a lot very early on in my career. The secret to that is having no life. When you’re in your early 20s and work a 9-to-5 job with no girlfriend or any other responsibilities, you can dedicate yourself to wrestling. You can drive to the building where the ring is set up and train three days a week. You can spend an entire weekend traveling to different states. You can spend your free time watching wrestling with your friends. Literally, nothing else mattered in my life for those early years,” Bennett explained.

Just barely out of high school around the time of the new millennium, Dash was obsessed with professional wrestling throughout his youth. He joined the amateur team simply because it was called “wrestling” and instead of perfecting the double leg maneuver, he taught his teammates how to perform the stunner at a time when Steve Austin set TV ratings records. During that time on the amateur mat in high school, he met a fellow pro wrestling fanatic, and they decided to find themselves an actual wrestling ring instead of the padded walls of the amateur practice room.

“During my sophomore year, I met another guy on the team that shared the same love for wrestling as me, Derek Tuttle. I caught up with Derek one day during my senior year after not talking for a while and he told me that he had been training to become a wrestler,” Dash commented.

Tuttle, who had a stint as a pro wrestler himself as Daron Smythe in the early-2000s, found a wrestling promoter that had the previously mentioned ring in the woods and allowed aspiring hopefully the ring time to learn the craft. By 2001, Dash and Daron were in the ring, sometimes as a tag team, and the pair began to learn their craft. One of the venues that hosted these learning exhibitions was the Moundsville Roller Derby, a hole-in-the-wall building with ceilings so low, the steel posts had to be cut down to fit the ring in the place. After he bumped around the roller rink, he took the few bucks he got for it and went to the snack bar for a soda and a pretzel. Despite the cramped conditions and meager payoffs, Dash saw this early bouts as a critical step in his overall development as a performer. Soon, he branched out across the tri-state area and landed a gig that opened the door to the next chapter in his career.

“I spent most of my Pittsburgh run as a heel because that’s where I found my stride. My time spent working in West Virginia helped me learn how to get over as an old school baby face. I never had the chance to show my full baby face potential in Pittsburgh, but enjoyed my time working as a heel there as well,” he explained.

The Pittsburgh platform for him was the now-defunct Pro Wrestling Express organization, previously one of the longest-running organizations in the region that was known for its local television show that sandwiched it between episodes of Shotgun Saturday Night and ECW Hardcore TV in the late-90s. By the time Dash landed in a PWX ring in the early-200s, the majority of its heyday was over, but its history kept it relevant for years afterwards. Dingy building and leaky roofs over the years at various PWX venues became a part of the organization’s identity, as a mixture of old school wrestling and gritty brawling allowed for the area’s future stars to get their start in the industry. For Dash, the format and the schedule of events nearly every two weeks allowed for him to flourish as a performer and produce the best work of his career as a villainous grappler.

“As far as being a heel, there are many layers to it.There is being cocky, arrogant, chicken, tough guy, crazy, and I pretty much ran the gambit of it all. When I really became successful at playing a heel, however, was just being myself without a filter. I’ve always been a nice guy to a fault, and would usually find myself getting taken advantage of. You can only go through so much of that in relationships and in life before it makes you cynical. When you step through the curtain and into the ring, you start doing things that you wouldn’t normally do in real life because you know there are no consequences,” Bennett remarked.

In 2011, with more than a ten years of experience under his belt, Dash Bennett claimed the PWX heavyweight title. He was the main event “bad guy” of organizations where he started in the preliminary matches a decade earlier During his reign as champion, he had the dubious Stacy Hunter as his manager at ringside and the duo riled up the crowd every time they stepped through the curtain.. He cites this period as one of the major highlights of his career.

“I can obviously point to certain matches or title wins as career highlights. That means that you’ve earned the respect of the booker and are being rewarded with a trophy for your hard work. I’m more proud of some of the moments that I’ve been able to create. Certain performances in matches, or certain reactions that I’ve been able to get from crowds. I’m proud of a time that I sold hundreds of dollars of merchandise on one show,” Bennett said.

“Dash was the top guy in PWX for a while. Everything he did was hitting. Good matches, good reactions, and he was elevating those around him. I’d argue that he was not only the top guy in the company during that time but that second was a distant second,” added BC Steele, regarded by many as the best manager in Pittsburgh wrestling.

“Dash was one of the guys I had the most fun with and grew with at ringside. He and I didn’t even need to talk, we just knew what to do,” said Stacy, a 25-year veteran in her own right.

In many ways, Dash felt like his run as one of the top names on the card to bring fans into the building was when he met his goal in professional wrestling. He met his future wife in 2011 and he was content to settle into civilian life outside of the circus of the local circuit. Instead he opted for the college studies mentioned prior and grew in the business administration career that yields him much success now.

“By the late-2000s, I knew I wasn’t going to be wrestling on national TV or making a living, and I was starting to make good money outside of wrestling, so I slowed down and stopped traveling as much,” he explained.

Today, the father of two young kids, Dash remains a dedicated follower of the wrestling industry and lends his advice to the next generation in a a mentor role, both on and off camera for Fight Underground, the Pittsburgh scene’s newest project organized by Quinn Magnum, one of the most respected figured in the arena. Bennett enjoys the opportunity to contribute to the sport without the bumps and bruises that go along with it, but even his passion for sports entertainment is secondary to the joy his family brings him.

“Now in Fight Underground, I have an opportunity to stay in the business and work behind the scenes with a local promotion without having to hurt my body. It’s a unique dynamic while I’m an on-air manager and coach, but have become a real-life mentor to these people as well. I find myself giving advice, reviewing matches and promos, helping others make connections. It’s pretty rewarding as well, the reward of being a parent to someone who loves you unconditionally the way a young child does is more satisfying than anything I’ve ever done in wrestling,” Bennett said.

So, Dash Bennett never “made it big” in professional wrestling. He was a weekend warrior that pursued his passion and saw it through, as he entertained fans all around his part of the tri-state area. He never inked an international contract that put him on pay-per-view, but his work outside of the realm of sports entertainment took him around the world. He traded a pile driver for a pen and a pair of boots for a briefcase. Did he work full-time in professional wrestling? No, but he’s undoubtedly a success as a family man, which he considers his greatest achievement.