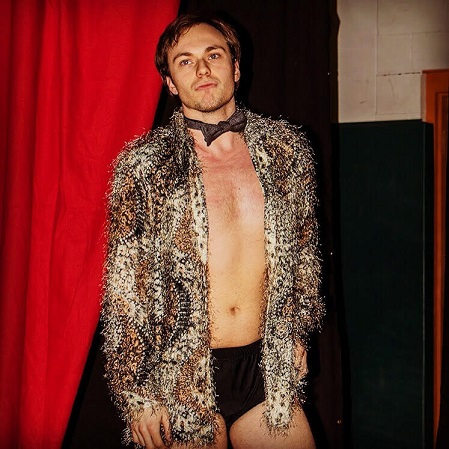 “Success is related to standing out, not fitting in.”

That wise quote was spoken on screen by Jon Hamm’s Don Draper character on the opening episode of the second season of the drama “Mad Men,” the television series that chronicled the happenings of a Madison Avenue agency in the 1960s. Despite the fictional and throwback setting, Draper’s word translate very well to the real-life aspects of the entertainment industry.

While much of the golden age of the professional wrestling industry was known for grizzled brutes or scarred wild men, it was the iconic Gorgeous George that stood out in the land of mayhem through his slick maneuvers and pageantry, propelling him as one of the most well-known figures of that era through the media of television.

When the Pittsburgh-based grappler Calvin Couture discovered the unique genre of professional wrestling, it was a very typical experience. However, where it led him is anything but typical. Similar to many from his demographic, the young Couture found the sport in the early 90s through formative episodes of Monday Night Raw. While the glow of the neon entrance way beamed through the screen, the colorful outfits and larger-than-life personas that battled in the ring made a profound impression on him.

“I remember falling in love with wrestling when Monday Night Raw started on USA and from then on out it has been a journey since. I always remember Randy Savage, Shawn Michaels and Marty Jannetty being early influences,” Calvin explained.

As time progressed and Couture found success in other aspects of his life, he found himself drawn to the sports entertainment world that he remained glued to through his life. In fact, the televised cards that were such a big part of his youth weren’t enough for his passion for the industry so he ventured to live matches as well, attending International Wrestling Cartel events held in Elizabeth, PA, a suburb of the steel city. Watching those bouts in-person also made their mark on him, prompting him to take a chance to chase a dream of his own, stepping into the squared circle the same way his wrestling idols had during those influential broadcasts of Raw.

“In all honesty, I was at a time in my life where I felt I needed to take a leap into something that I’ve always loved,” Couture commented.

Ironically, Calvin found himself at the IWC’s Iron City Training Academy for his introduction to the in-ring aspects of sports entertainment, the same way that IWC introduced him to the concept of the independent scene. Always mindful of his health and dedicated to exercise routines, Couture found the tedious process of landing on the canvas repeatedly less demanding than some of the mental hurdles of self doubt as the pursuit of glory in the squared circle seemed like a daunting task.

“I had always been a fan of the International Wrestling Cartel and you may even see a young Calvin in the crowd at some events so IWC was always where I wanted to be. Training is challenging physically, but for me it was very mental. No one is going to believe what you are doing if you don’t believe in yourself,” he said.

In early 2017, a lifetime of fandom led Calvin Couture, now-dubbed “The Fashionista of Professional Wrestling,” to his pro debut against another steel city standout, Andrew Palace. The event was held at the Shannock Valley Youth Center in Rural Valley, PA, and as the name implies, the site of this showcase wasn’t exactly the Manhattan Center that hosted early Raw, but the opportunity meant just as much to the aspiring Couture.

“Wrestling Andrew Palace, if you’ve seen this guy, you know he’s a lot to handle. I’ve never been in the ring with someone who has the energy that he does. Many people don’t know, I actually hyper-extended my knee within the first few minutes of the fight, but that match was everything I’ve worked for and I wasn’t going to bail out,” Calvin remarked.

In the nearly three years since he laced up his boots to start his career, the bow tie-clad competitor quickly made a name for himself, both for his en vogue fashion sense and crisp technical skills. Drawing inspiration from Tiffany Pollard and the Kardashians of reality TV, Couture often struts his way to ringside in his trademark sparkle jacket or a finely-tailored robe. During his walk to the ring, the aisle substitutes for a runway as he uses the platform under a literal spotlight to showcase his style.

“Calvin is a little different in the fact that he can be a little bit of everything, but also be something different you’ve never seen before,” Couture explained.

The combination of an over-the-top persona and solid in-ring ability made him a commodity among the tri-state area and he regularly competes for IWC, as well as Ryse Wrestling in Pittsburgh, while appearing for Premier Championship Wrestling in Cleveland, and various other groups in the area. In just a few years, he shared a ring with stars like MVP of Smackdown fame, posed next to Hollywood star David Arquette, and worked with of the well-known veterans that built the Pittsburgh scene. Among those accomplished veterans are Robert Parker Williams and BC Steele, a pair of real-life best friends that became a notable duo that recruited Couture to form the Golden Chic International stable in Ryse Wrestling. With Williams’ nearly two decades of experience, most of which as an in-ring athlete, and Steele widely regarded as the best manager in Pittsburgh for the past several years, Couture considers his time in the tag team as one of the most valuable learning experiences of his career so far.

Still, the grind of an often harsh industry can be exhausting and challenging, especially for an athlete that remains as dedicated to success today as he was for that very first bout inside the rural rec center. But, with a solid playbook of skills and an entertaining presentation, many expect several successful years for Couture, both inside and outside of his hometown. In fact, as he reflects on the fortunate formative years he had so far in the sport, he remains driven to make his mark at the highest level possible.

“The toughest part about wrestling is keeping your emotions and mindset in check. It can be a frustrating business so you just have to be humble but keep hungry. It won’t always be your time and you may see others get opportunity but I always look at it that you’re exactly where you are supposed to be. I want to keep traveling and getting to new places. At this point, I want to become the best version of myself and want to continue to perfect my craft. My ultimate goal right now is to appear on TV so you never know where I’ll be next,” Couture said.

In one of the most unique industries in entertainment, Calvin Couture found a way to present his own unique brand of professional wrestling. The bow tie, brash nature, and the latest fashion is blended with the athletic ability for him to compete as a well-rounded wrestler. All things considered, it’s quite remarkable that those neon lights of early 90s sports entertainment brought Couture to find himself under the spotlight of the squared circle.