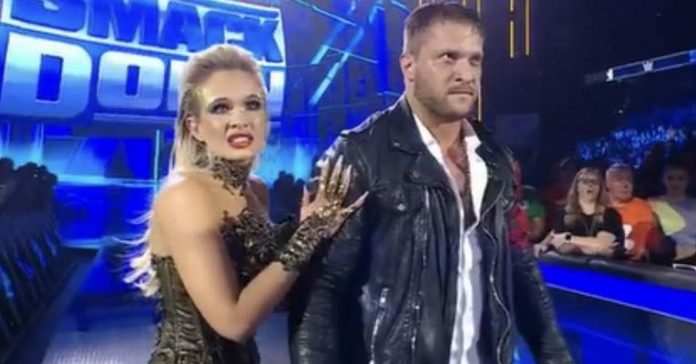 Scarlett and Karrion Kross are back with the WWE.

The Bloodline entered the ring for a promo to boast about their triumphs at SummerSlam on this week’s post-SummerSlam episode of SmackDown on FOX. Undisputed WWE Universal Champion Roman Reigns  gave Paul Heyman well wishes and claimed he doesn’t know when Heyman will recover from the F5 he received at SummerSlam. Then, Reigns’ opponent for the Clash at the Castle, Drew McIntyre, interrupted him.

McIntyre was about to charge the ring to brawl with The Bloodline when the familiar music of Kross came on. McIntyre turned to face the big screen as Kross’ entrance started to play.

Then, at ringside, Kross abruptly ambushed McIntyre and beat him. Drew was left lying on the ground with his forearm resting on the back of his head as Kross repeatedly slammed his head onto the steel ring steps.

As Scarlett joined him at ringside, Kross then shifted his focus to The Bloodline. Under the watchful gaze of The Bloodline, Scarlett inserted an hourglass inside the ring. With Scarlett by his side, Kross stood tall as he tapped his watch to signal to Reigns that time was running out.

Kross and The Bloodline were staring each other down as SmackDown went off the air. Click here for complete WWE SmackDown results.

Just this morning, it was reported that WWE had discussed bringing Kross back under Triple H’s regime. Since his November 2021 release, Kross has worked for MLW, NJPW, and a number of independent promotions.

Kross was previously booked by Triple H as a top star in WWE NXT, but his call-up to the main roster was considered as a bit of a misstep by the creative team because he was introduced to RAW without any real plans in place. With Executive Vice President of Talent Relations & Head of Creative Triple H running the show, it now appears that Kross is set for a significant push on the main roster.

Stay tuned to PWMania.com for more. Here are highlights from the segment: