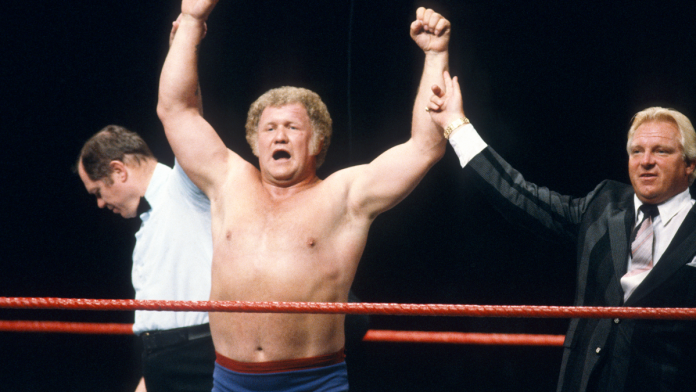 The wrestling world is mourning the loss of WWE Hall of Famer and eight-time NWA World Heavyweight Champion Harley Race, who passed away Thursday at the age of 76.

Race died due to complications from lung cancer, according to WWE in a statement on his passing.

Race had been in and out of the hospital for the past several years due to a variety of health problems. Back in March, one of Race’s greatest rivals and contemporaries, Ric Flair, told a crowd at the Hard Rock Hotel & Casino in Atlantic City, New Jersey that Race got diagnosed with terminal lung cancer, a claim he’d later call “misinformed.” David Marquez of Championship Wrestling from Hollywood clarified Race’s health status the next day, saying he was told by Race’s family that while the wrestling legend was diagnosed with lung cancer, it was not considered terminal.

Race was hospitalized for more than one week due to health issues that came up while he was traveling to Knoxville, Tennessee for a pop culture convention on July 13. He went back home on July 23 for continued care and treatment.

It's been a quiet past few days. Great news came yesterday. Today, we are being transported back home to continue care and treatment.
Thanks to everyone for their support but keep it coming. There are only be a few more shirts left to orderhttps://t.co/2lFs14Lx7C pic.twitter.com/EJpvwMN7K4

The wrestling legend’s death was confirmed Thursday afternoon in a statement from a verified Twitter account for Race, noting that he died at 12:50 p.m. CST.

Here is WWE’s statement on his passing:

WWE is saddened to learn that WWE Hall of Famer Harley Race passed away today at age 76 due to complications from lung cancer.

The tough-as-nails Race was so universally respected that WWE, despite having seceded from the NWA and having its own World Heavyweight Champion, chose to recognize Race’s title status as well. As a result, Race was the first NWA Champion to engage in title unification matchups against WWE Champions like “Superstar” Billy Graham and Bob Backlund.

In what seemed unthinkable at the time, Race, one of the NWA’s most influential figures of all time, joined WWE in 1986 during the company’s national expansion. After winning the King of the Ring tournament, Race was the first to don regal robes and a crown. “King” Harley Race was managed by Bobby “The Brain” Heenan and was introduced to a new generation of fans. Race battled all of WWE’s top heroes and pinned Junkyard Dog at WrestleMania III in front of a record-setting attendance of 93,000 fans.

WWE extends its condolences to Race’s family, friends and fans.