Royce Isaacs & Guillermo Rosas starts this match off then Isaacs catches a leapfrog attempt before Rosas escaped a suplex. A chop to the thigh stings Isaacs ahead of a suplex for a one count before Cody Chhun tags in and had Isaacs tripped into his knee for a two count.

Chhun stings Isaacs with a chop but gets pancaked as Jorel Nelson tagged in and ran into a series of arm drags. Dropkicks from C4 take care of the Wrecking Crew, as they began to double team Nelson ahead of a dropkick aided suplex for a two count. Misdirection from Nelson confuses C4 as West Coast Wrecking Crew turns it around leading to Isaacs walking Chhun around ringside in a stalling suplex.

Rosas is kept isolated as Isaacs’ gutwrench suplex flung him across the ring for a nonchalant two count before a lariat wiped out Rosas’ attempted comeback. Nelson picks up an easy two count from that before Rosas’ desperation sunset flip earned him a two count. Isaacs is back but couldn’t avoid Rosas from tagging out as Chhun went wild with dropkicks then with Dusty punches that leads to a snap DDT on Isaacs.

West Coast Wrecking Crew fights back by double teaming Chhun ahead of a pumphandle powerslam from Isaacs for a near fall before Chhun ‘rana’d Nelson into Isaacs to buy him some time. Chhun hands off Nelson for a Rosas powerbomb before a cutter out of the corner from Chhun and an Angle Slam from Rosas almost won it.

Chhun dove on Isaacs to stop him from breaking up the pin then returned only to get caught by Nelson as Royce Isaacs snuffed out the C4 double-team. Nelson’s Fisherman Buster leaves Chhun laying, as did an Alley Oop into the corner, a German suplex out of it before an Isaacs Dominator and a Nelson Dominate Elbow Drop gets the win.

The match starts off with a lock up that took Kenta into the corner with QT Marshall posing on the break before Kenta returns the favor by slapping him instead.

A flurry of strikes from Kenta led to Marshall bailing Kenta gives chase, avoiding an elbow drop back inside before he started going after Marshall with chops. Marshall is left in the corner but bails to avoid a teased hesitation dropkick only to eat an apron PK. Up on the apron, Marshall charges Kenta into the ring post and then faked out a trip to the rails as Kenta was taken back inside.

Marshall adds a backbreaker to the mix for a two count as he wore down Kenta in the corner then clotheslined him out of it to keep the direction of travel going. Marshall teases a Go 2 Sleep but Kenta elbows out and hits a DDT instead before kicks began to wear Marshall down into the corner. The hesitation dropkicks next but Kenta just slaps him instead before Marshall pulls Kenta into the middle rope.

A pop up forearm drops Kenta for a two count shortly afterwards. Kenta manages to snatch the Green Killer after Marshall has been sent onto the apron before a hesitation dropkick into the corner and a double stomp off the top squished Marshall for a near fall.

Marshall wipes out the referee after he escaped a Go 2 Sleep and with no ref, Marshall heads outside and grabs a chair from under the ring only for Kenta to kick it into Marshall’s face.

Kenta grabs the chair after that and whacks Marshall’s back before a low blow stopped Kenta in his tracks. Marshall lays out the chair and teases a powerbomb into it but Kenta countered into a DDT before connecting with Go 2 Sleep to put Marshall away.

Trent Beretta & Chris Sabin starts this match off with arm wringers then arm drags ahead of a stand off which ended with Sabin asking for a hug only to roll up Beretta for a two count. Tags bring in Alex Shelley & Rocky Romero as they stayed at close quarters with Romero’s toe hold leading to him having to snapmare his way out of a hammerlock.

Sabin kicks Romero in the ropes as Motor City Machine Guns swarm the ring but a Tijeras from Rocky took care of Sabin ahead of Forever Clotheslines in the corners. Beretta’s back to light up Shelley with chops before the ring filled again this time leading to Romero getting charged knees first into Shelley in the corner.

Romero grounds Shelley with a chinlock from there but after Shelley got free, Sabin trips up Romero in the ropes and then scored with a dragon screw between the ropes as the champions targeted Romero’s knees. Elbow drops from Sabin go for both knees of Romero before Shelley came in and took Romero back down with chops before dualling Figure 4s has Roppongi Vice scrambling for the ropes complete with referee Jeremy Marcus instantly leaping on Shelley to undo the hold.

Shelley’s quickly caught with a swinging DDT by Romero as he bought himself some time, leading to tags to bring in Sabin & Beretta. Beretta runs wild with forearms and suplexes, before he trapped Sabin in the corner with chops and forearms. Shelley sneaks in to cut off Beretta but succeeded in clotheslining Sabin as Roppongi Vice remained ahead leading to a piledriver on Sabin for a near fall.

On the apron, a back body from from Sabin sees Beretta take a bad landing as Shelley & Romero took over in the ring, trading right hands. An uppercut from Romero before connecting with a rewind enziguiri before Romero ate a sandwich of apron PKs on the outside. Shelley held the ropes open for a Sabin dive, but Roppongi Vice hit the ring to cut him off ahead of the Strong Zero from Romero then a diving knee for a near fall from Beretta.

Another Strong Zero’s stopped by Sabin who then countered a Dudebuster into a Code Red for a near fall thanks to a superkick from Shelley. On the bottom of the screen we see Rocky’s head scroll across as he’s thrown into the ring post as Beretta then got taken into the corner for a running Sabin kick ahead of a teased Sliced Bread/Powerbomb combo.

Romero is back to make the save then hits the Sliced Bread/Powerbomb combo out of the corner for themselves for a near fall. Sabin’s forced to fight out of a double superplex as he instead flew into Roppongi Vice with a crossbody off the top rope before an errant Beretta superkick lays out Romero. Shelley’s back as he helped Sabin hit a cutter on Beretta before Shelley called for a Strong Zero forcing Beretta in to break up the cover just in time.

Beretta tries to turn it around, but he’s blitzed in quick fashion taking a Muta Lock and low dropkick as Romero ends up alone once more with kicks and a Dirt Bomb to Romero gets the win. 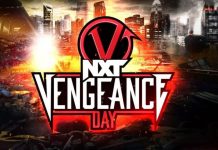