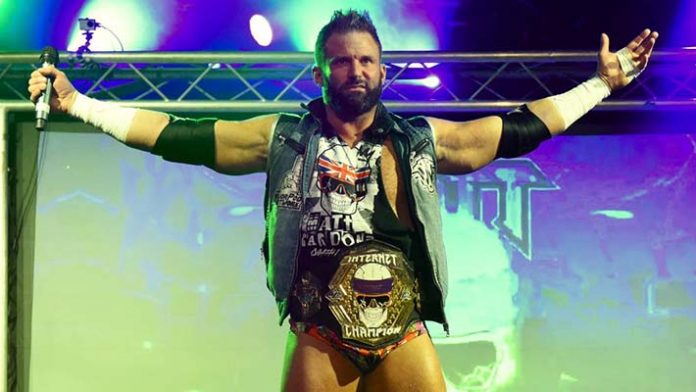 Since early this year, I have had the privilege to write pieces for PWMania.com, which include speaking to some of the UK’s most prominent wrestlers and attending shows put on by one of my favorite promotions, PROGRESS Wrestling.

From January, when the promotion put on their first show post-pandemic under new ownership, I have seen the company do all the right things with new and familiar talent whilst also putting on excellent shows to entertain the fans.

In my opinion, it’s been a return to the PROGRESS many of us first fell in love with.

If ever that statement needed validation, it was on Sunday at Chapter 141, Handshakes and Cheeseburgers.

Firstly, as a fan, it was nice to see many regular faces return to the crowd, all back for their first show since 2020. A lot had stayed away, probably because they felt they wanted to make a stance against a company that went against ‘Punk Rock’ principles by signing up with NXTUK at the end of 2017 and was then embroiled in the #speakingout movement, something I feel has been harsh against the new regime.

Either way, they’re back because they realized how good this show would be and how well PROGRESS has been doing.

Secondly, this show highlighted amazing PROGRESS talent alongside the roster from the excellent GCW, who have been making waves themselves this year after a blistering start at Hammerstein Ballroom in January. It was the perfect blend of independent talent from home and overseas, all looking to forward the cause of how good independent wrestling is. And because of that, we got a great show.

Big props are deserved for Simon Miller and the cheeseburgers he handed out to open the show. Miller has grown into this role, and now I couldn’t think of anyone else doing the job. His relatable, warm persona works so well as he easily communicates with the crowd, cracks jokes, and sets the tone for a great show ahead. 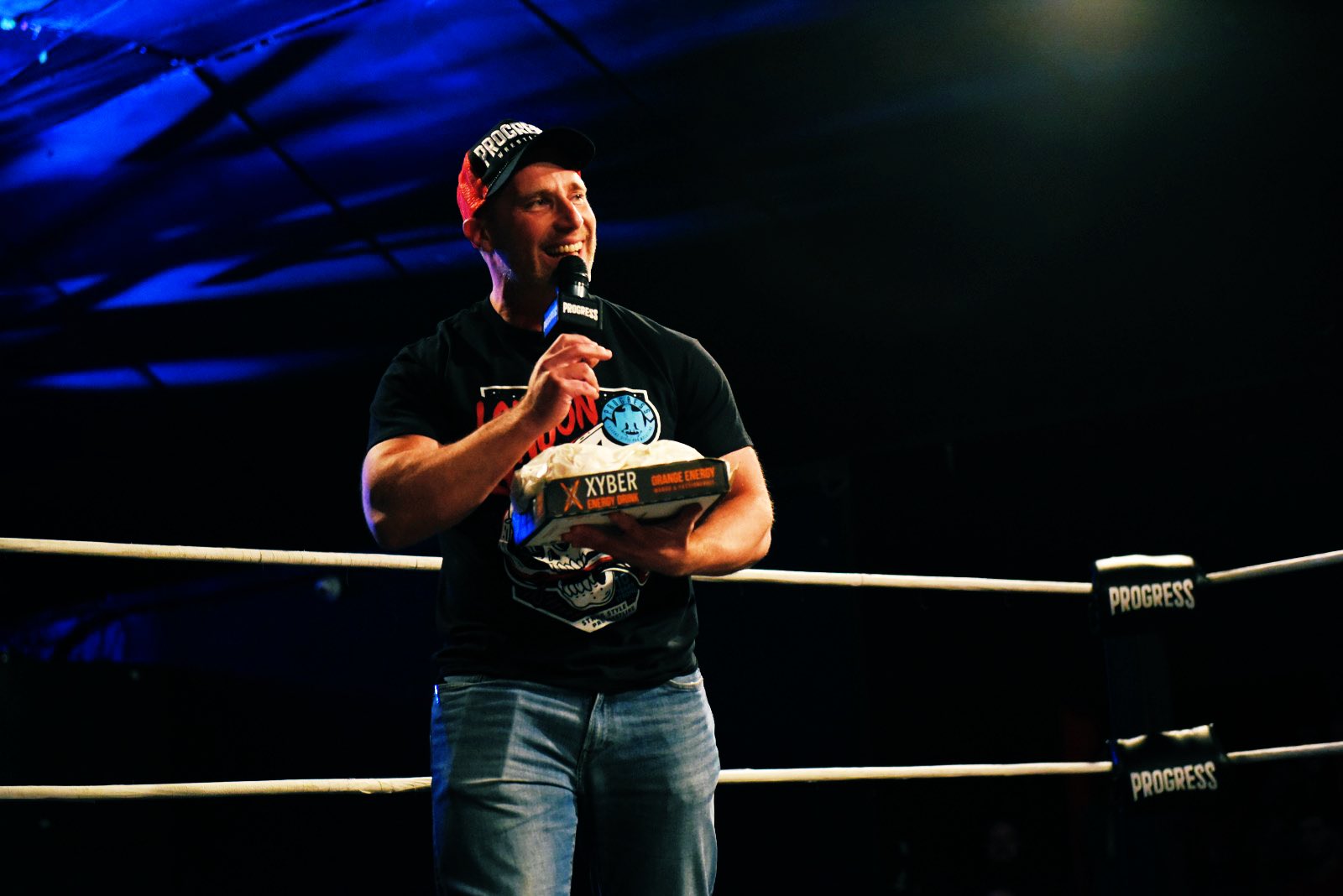 If you’ve read my columns, you’ll know how much I love the video recaps before the show. They do the best job of hyping up the forthcoming matches while giving the audience an understanding of why those matches will take place. It’s the simplest yet the most significant way to help get a crowd invested in storylines or talent they may not be too familiar with. The fact it is done with great editing is credited to everyone working hard to ensure it’s a packed house for each show.

All this good stuff, before the matches…

The show opened with a brutal tag team title match where Sunshine Machine got 1 step closer to the defense record of 9 as they defeated Kings of The North. Great opener with some top spots and strong style in-ring action. PWMania.com spoke to TK Cooper of Sunshine Machine last week, and his passion for highlighting tag team wrestling as the core of the scene was evident here. 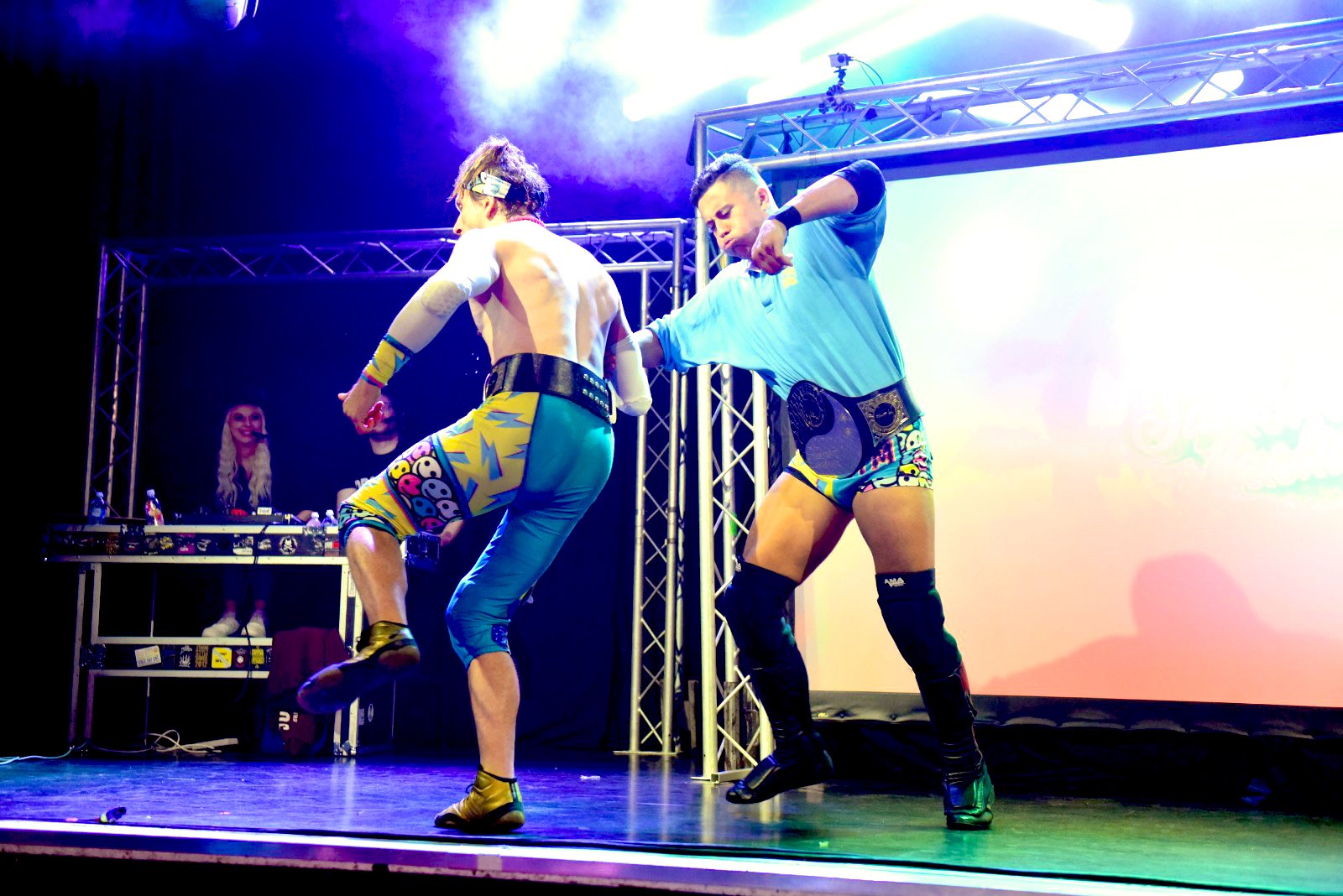 With Eddie Dennis appearing later in the show and announcing the reunion of FSU on forthcoming shows, it already feels exciting to know that Sunshine Machine and Dennis/Andrews are on the cards. Take my money for that one!

When you want a singalong, are there many better wrestlers to ask for than Effy? What a year this man is having. As the Ballroom sang Goodbye Yellow Brick Road and got caught up in the moment, Tate Mayfairs wasn’t having any of it and ensured it was his name everyone would be cussing out post-match. Yes, Mayfairs won and clearly didn’t care what the vocal crowd thought about him as he took Effy apart, both in and out of the ring, during a really solid match. Although Mayfairs took the W, we want Effy to know…PLEASE COME BACK! 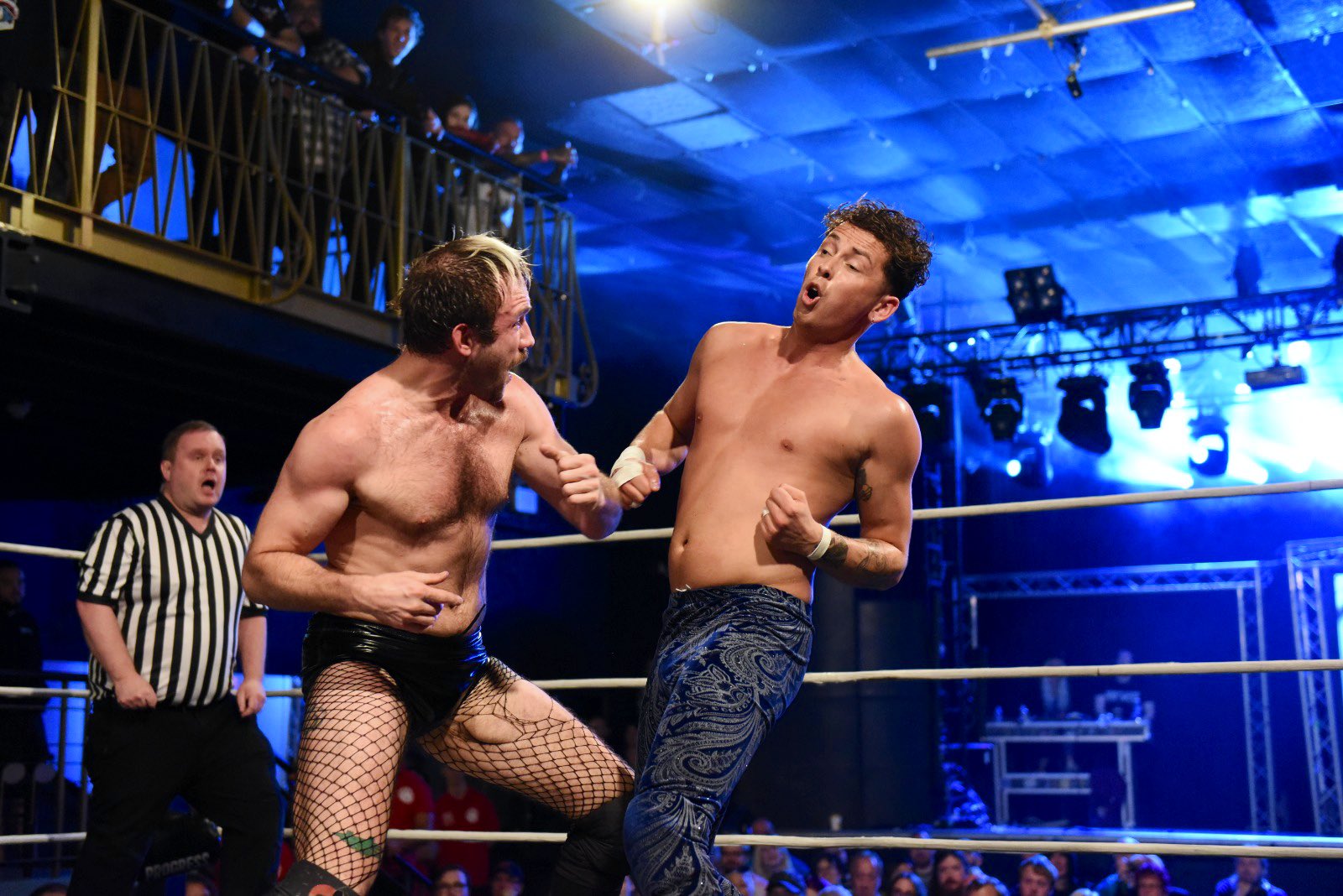 And on the subject of coming back, the hot crowd DOESN’T want someone to come back, Matt Cardona. The ‘Always Ready’ wrestler was hated by the crowd, and he lapped it up while defending his Internet Championship against Gene Munny. There are not many better than Cardona in the world at the moment (he may have told you he’s #13 in the PWI 500), and his heelish ways mean you can’t help but love to hate him. A low blow helped him defeat the fans favorite in Munny, who got his revenge post-match and raised his own title, much to the delight of the fans. 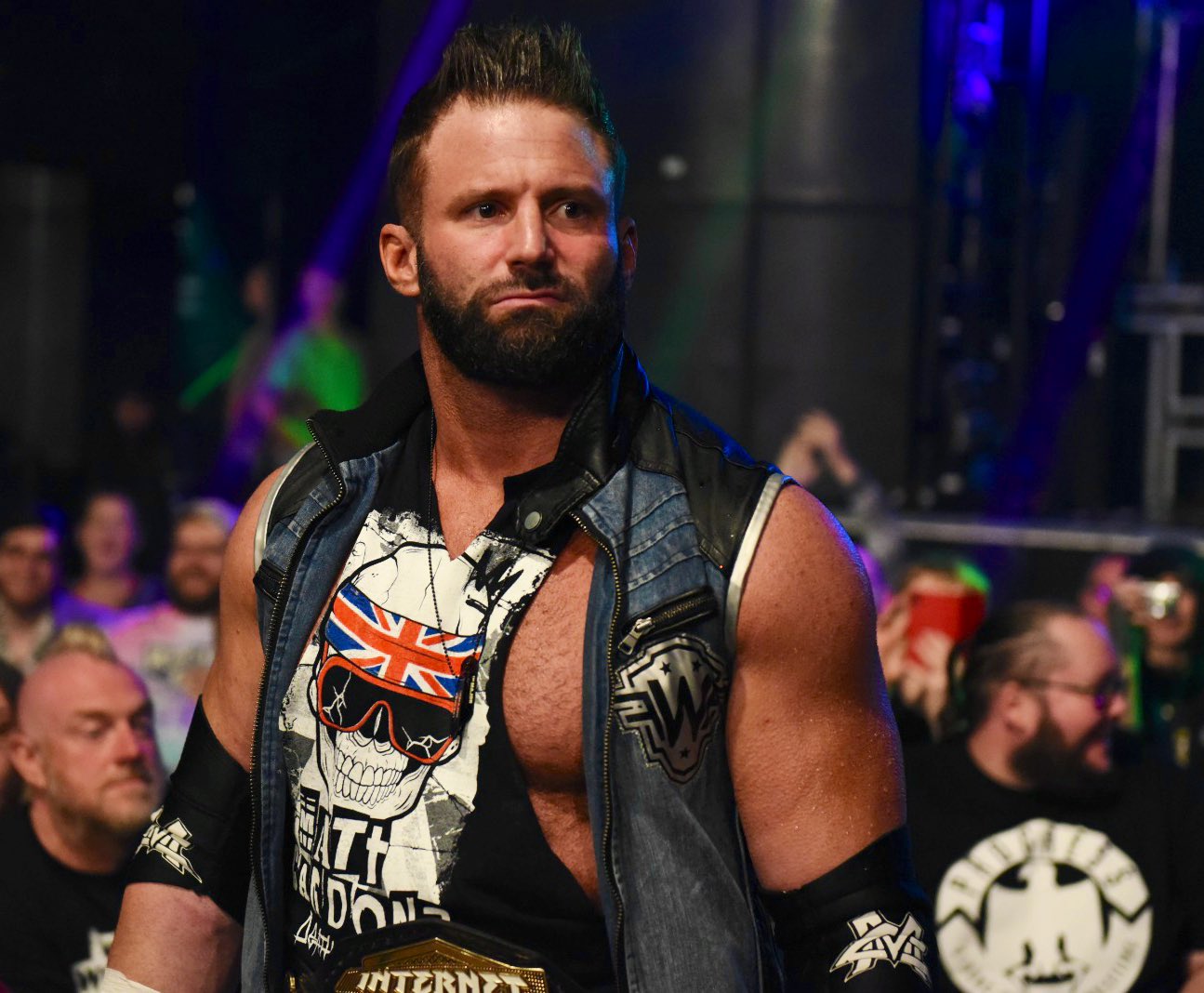 Soon after, it was time for the Bad Boy, Joey Janela, to take on Kid Lykos in a match that Lykos took the win on…obviously, with help from that other ‘shitty little horse.’ But what a win for Lykos. What does this mean next?

Post Interval, we were treated to another top, top match from two superstars who are raising the bar with each match they compete in. Blake Christian vs. Leon Slater was excellent, and as I watched on with GCW ring announcer Emil, he was astounded by what he saw from 17-year-old Slater. I’m telling you people, this guy is going places and if you run a promotion and haven’t booked this guy, then do it before he is doing big things on the biggest stage. Christian won in this fast-paced, high-spot clinic, but both left with their head held high.

The Daily Star’s favorite wrestler, Lana Austin, added to her stable as she and Skye Smitson defeated Allie Katch and PROGRESS Woman’s Champion, Kanji, all with the help of 6 ft powerhouse LA Taylor. With Taylor and Smitson by her side, and after pinning the champ, I think the words ‘AND NEW…..” may be heard while Austin stands tall very soon. 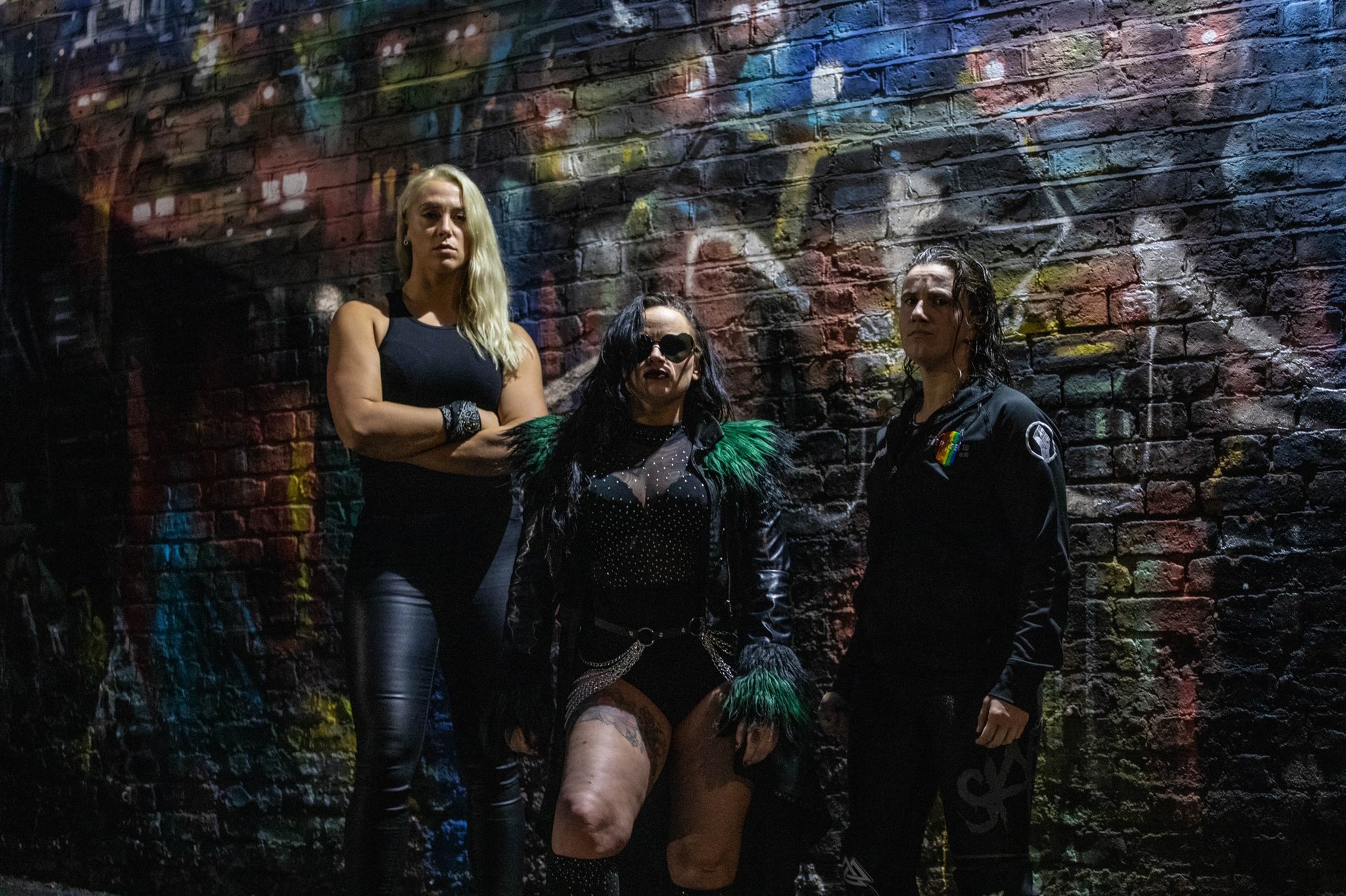 I’ve got a lot of love for Man Like DeReiss, and after he won the 7-way number 1 contenders match, I was so happy for him. I love his work with Dan Maloney in the 0121, but just like Maloney did recently against Big Damo, I think it’s fair for DeReiss to get a chance at the World Title. He is a fantastic athlete and will make his mark this past weekend against Cardona for TNT. He will see six other competitors in Callum Newman, Jordan Oliver, Tony Deppen, Cole Radrick, Danny Black, and Robbie X on Sunday is awesome. He has the perfect blend of solid mat wrestling with high-flying maneuvers. I wouldn’t mind hearing ‘AND NEW…” for this guy.

Finally, it was the main event. A deathmatch that our champion, Spike Trivet, tried to get out of when it came to facing Drew Parker. These two had a crazy deathmatch some years back in PROGRESS at The Dome. I remember the match and how brutal it was. This was the same. Glass, pins, ladders, tables. Madness, basically. Spike is such a c*^& but he carries the company well as champion. PWMania.com spoke to him earlier this year, and it’s clear the guy wants to beat people, even if it does mean he gets help from Bullit, who seems to have allied with the champ, which helped ensure the win. Trivet is staying champ for a while; I can tell you that. If only Cara Noir was around. In the words of Delia Smith and Tom Dawkins, where are you?!?!? 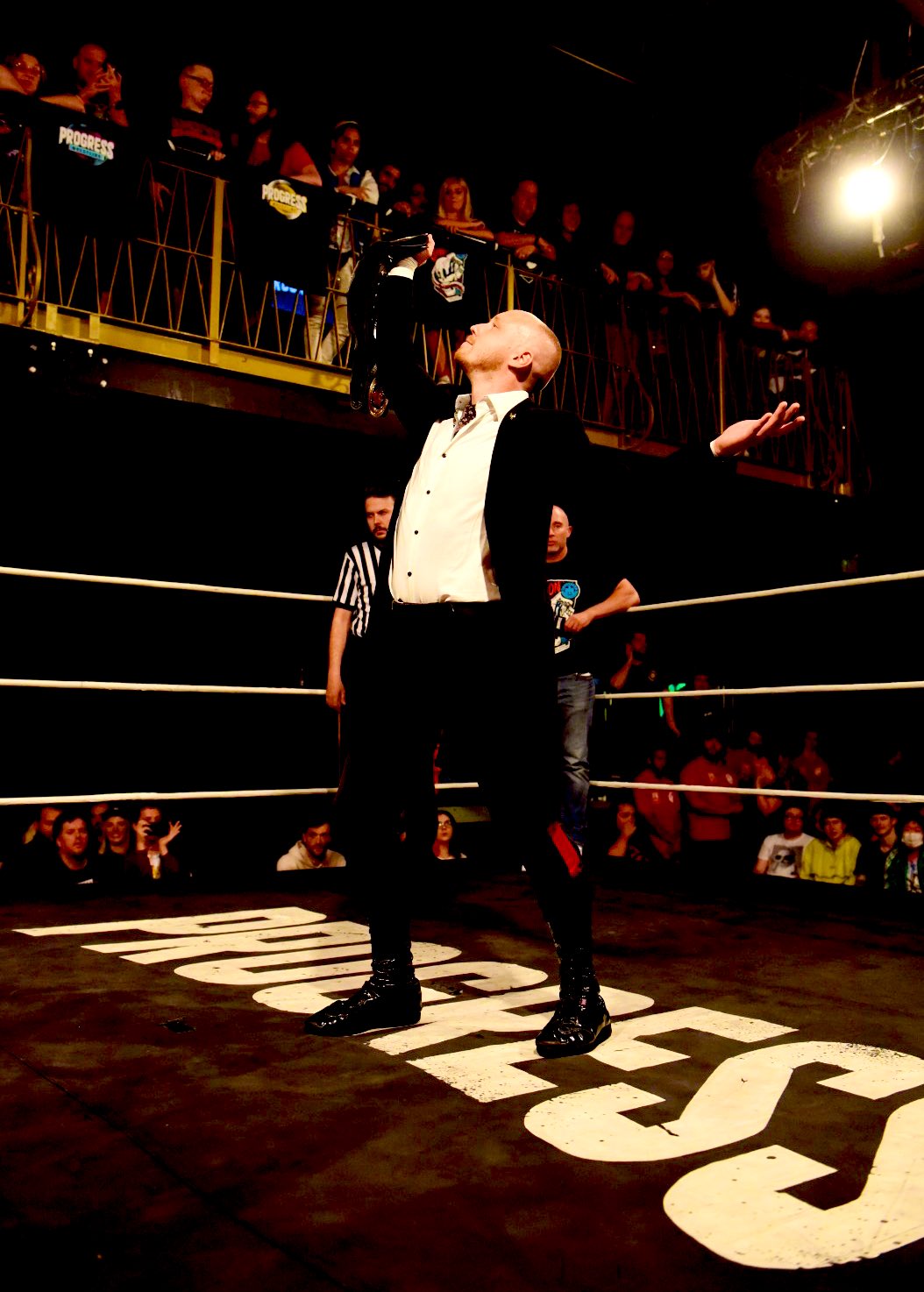 So, you can clearly see, that I’m a massive advocate for the great work of PROGRESS Wrestling, and why not? They put on stellar show after stellar show, giving us everything we fell in love with about independent wrestling while the houses have grown month on month. I’ve read a lot online from people that don’t get what the company is trying to do, which is return the UK scene to the glory days of 2014-17, and for me, I think they’re doing it. So, for those who still have PROGRESS on their mind, get to the next show, enjoy the fruits of independent wrestling and let’s revel in the fact we have amazing shows in London every month.

See you in London on Sept 27th at The Dome, Tuffnell Park, and then at Electric Ballroom on October 23rd! Tickets available at https://progresswrestling.com/tickets/