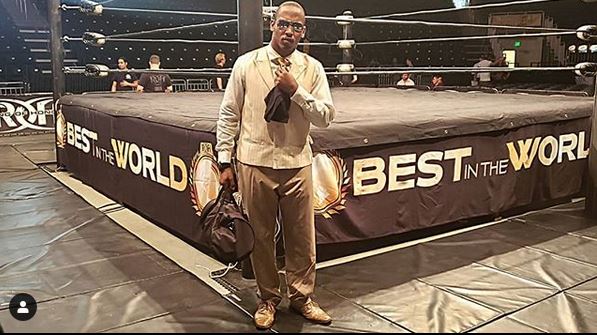 “I can’t stop nobody, I can’t knock the hustle” -Notorious BIG

When Christopher Wallace enhanced his image through the lyrical prose of hip hop, he created the street-wise Biggie Smalls persona through tireless repetition of his craft, an aspect that applies to much of the entertainment genre, regardless of the form it takes.

Rev. Ronnell Hunt, a legitimate ordained minister, found his hustle through a combination of seemingly endless energy and a deep passion for the sport of professional wrestling. Just a few months ago, the Pittsburgh native found himself standing inside Ring Of Honor’s state-of-the-war dojo facility in front of some of the wisest minds in the business. The wrestling Reverend was chosen as one of the select few applicants for the ROH Combine in Baltimore, a training camp that has opened the door for several Ring Of Honor mainstays.

But that trip to Maryland this past May had many more miles behind it, as Ron Hunt has dedicated much of his life to entertainment in some form or fashion.

“I started with plays in college. One of my media professors was actually doing more movies and television shows. After asking him how did he get the opportunities, he told me about a company that he was working with. That was 2012 and I have been working with that company and my agent since. I have had the pleasure of working on films for Netflix, Hulu, NBC, Lifetime TV, Nike Commercials and all,” Ron explained.

Everything is set and ready!! Now we relax until film days!!

I've truly been blessed to work on a host of projects with great people including w/ Toni Braxton, Stephen King, Bill Skarsgard, Denzel Washington, Chris Noth and others. pic.twitter.com/Zq2JcJW0wf

With dozens of roles in a variety of TV and film projects to his credit, Hunt found it natural to embrace a character, something that he eventually transitioned to for the squared circle. Fresh from high school graduation, the young Ronnell wanted to follow his passion for his childhood dream of sports entertainment before he hit the books full-time to chase scholastic glory in college. A trip to Florida brought him face-to-face with one of the most fearsome grapplers of an old school era of the industry. Afa, a Hall of Fame wrestler as a member of the legendary Wild Samoans tag team, runs a no nonsense training academy, an experience that Ron considers pivotal to the start of his wrestling career in late-2012.

“I have played football, basketball, and baseball all my life, including college years. Nothing compares to anything like professional wrestling. I have been fortunate to visit a host of wrestling schools, and Afa’s is by far the most physically, mentally draining, yet educational at the same time,” Hunt remarked.

Following the grueling months of the tedious process of landing repeatedly on the canvas, Ron returned to the steel city to embark on his collegiate grappling to pursue higher education in media, another avenue that allows him to use his personal form of showmanship.

“It wasn’t until I graduated college that it took off the races for me since I could dedicate 100% of my time and efforts to this business that I loved since day one. It’s been a bit of a climb because although I am a Pittsburgh native, I was not really known to the wrestling scene. I love the Pittsburgh wrestling scene and feel every company has its unique flavor and personality. Some areas have a lot of companies, but they all feel the same. Pittsburgh has a little bit of something for everyone and that is a good thing for fans and wrestlers,” Ron said.

Fueled by a variety of coffee and other caffeinated beverages, Ron Hunt has ambitiously spent the past few years taking every media, acting, or wrestling gig he could find, often juggling those projects at the same time. His over-the-top antics and loud personality made him a memorable presence in many different settings, but it was still challenging to keep such a hectic schedule for the aspiring superstar. However, the nearly endless grind paid off more recently, when he joined West Virginia’s WBOY-TV as a reporter early last year.

“It has its ups and its downs, but I try to look at everything as a learning experience. Sometimes we don’t truly understand how blessed we are until we experience someone that has it much worse than we do. Every day I leave work humbled and blessed that I was able to help someone get their voice heard and hopefully their issues solved. I work for WBOY-TV now and have been there for a year and a half. I have been working in TV as a whole for five years and radio for four years prior,” he explained.

Still a diehard fan of the genre that he idolized for the majority of his life, Ron passionately follows the industry as much as he strives to learn as much as possible in the ring so he jumped at the chance to showcase his ability in front of knowledgeable figures from one of the most established promotions in the United States, Ring Of Honor. Hopeful for a chance to impress, Hunt applied to the previously mentioned ROH Combine and was seen as an athlete with much potential so he was selected to attend, an experience that he considers one of his most valuable in his time in wrestling at this point in his evolving career.

“The ROH combine is taxing on the body mentally and physically. I’ve been to a few and each day is about ten to twelve hours of being surround by knowledge, critiques from world champions, top wrestlers, executive producers, and other members of the ROH front office. You are there early in the morning. We do a host of promo work, in-ring work, matches, and take part in individual evaluations. It is a very detailed process and opens your thinking beyond way more than what you think you may already know. I’ve had the pleasure of sitting under the learning tree of a lot of names that have helped pave the way and I am forever grateful for the opportunities that are in the works. I consider Ring of Honor my home and right now I am very blessed to say I feel like I am in great hands with them,” Ron Hunt said.

The son of a pastor and fully ordained last year, Ronnell Hunt continues to pursue his Master’s degree in Divinity, which gives him faith that all his hard work will pay off in one form or another.

“My ultimate goal is to make pro wrestling full time. I love to encourage people young and old, push their excitement to the next level, and also tell my story. Each year I say it’s my year, each year I feel that my footprint gets deeper in this game, and each year I raise the bar for myself so I am never complacent or satisfied. I risked way to much and came way to far to just be satisfied with where I am. If I can share my story with the world via wrestling that’s my goal.”

Where this path takes Ronnell Hunt remains to be seen, but he undoubtedly has the willingness and the passion to work as hard as he possibly can to make an impact. More than anything, his story is a prime example of enthusiasm and dedication to the industry.

WWE PWMania.com Staff - 01/24/2020
In an interview with Chris Van Vliet, former WWE star Alex Riley opened up about backstage heat he had with John Cena during his...