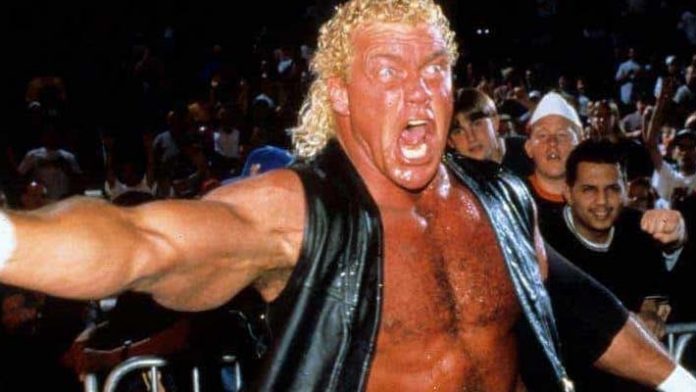 I’ll start by saying this: I am a big Sid Vicious fan. You look back at his career and while he was never the best pro wrestler during his time, he had something that caused fans to flock to him. Sid will never be remembered as one of the best big men of all time. But he had the potential to be just that.

After a brief run in the NWA as a team with Dan Spivey known as the Skyscrapers, Sid became a member of the famous Four Horsemen upon his return from an injury. Not just anyone, at least at this time, was made a member of the Four Horsemen. We are still a few years away from the Paul Roma years. Sid was brought in as the muscle of the group. His first major test was Robocop. Now of course you may find that as a joke. But Robocop was big during this time period and it put some big spotlight on Sid. As time went on Sid was promised a big main event run with the world title if he re-signed. But instead Sid left and went to the WWF.

Here’s the first instance of what could have been with Sid. What if Sid stayed with the NWA/WCW at this time? Ric Flair left in the summer of 1991. Could Sid have been crowned Champion and took off as the face of the company? Clearly the higher ups in WCW saw something in Sid. He was still relatively knew in the wrestling business and was still on his way up.

Instead Sid decided to jump ship and go to the WWF. Once again, Sid was immediately pushed into the spotlight by being the referee of the SummerSlam 1991 main event. Sid missed some time at the end of 1991 with a bicep injury, but came back in the 1992 Royal Rumble. And guess what? He was OVER. The 1992 Royal Rumble Match is one of my favorites matches to watch. The crowd was a unique one that night. The event was held in Albany, New York. And they were very anti-Hogan that night. When Sid eliminated Hogan the crowd loved it. Hogan immediately threw a fit, despite the Rumble being EVERY MAN FOR HIMSELF. It’s like the higher ups weren’t expecting that reaction. During the confrontation after the Rumble match the crowd is clearly pro-Sid, so much so that you can tell it rattles Hogan. And the WWF also had to go back and edit the sound and commentary after the event (the original audio and crowd response is on the WWE Network).

There are a million different stories about the Wrestlemania 8 main event. Some will have you believe Sid vs Hogan was always the plan. Others will tell you that Sid vs Hogan only came about because the Ric Flair vs Hogan matches drew poorly on the house show circuit. Either way, Sid was main eventing the WWF’s biggest show after being in the company less than a year.

But we once again got the next “What Could Have Been” of Sid’s pro wrestling career. Sid failed a drug test before Wrestlemania 8. He still took part in the match and went on the European tour after Wrestlemania, but voluntarily quit the company after for a variety of reasons. Of course, we were coming into the summer months and Sid is known to like his softball. Sid left to proceed a career in softball and left big money on the table yet again. Could Sid have been in Yokozuna’s spot in late 92/early 93 had he stayed with the WWF?

It was back to WCW in 1993 for Sid. He returned in May as an associate of Col. Rob Parker to defeat Van Hammer at Slamboree (side note: Van Hammer is my least favorite wrestler of all time. I’ll save my thoughts on why if I ever review a show with him on it). Sid teamed up with Vader during the summer. Sid and Vader. That is one terrifying tag team. And guess what? Sid was once again over with the crowd. I watched a few of his matches from 1993. At Halloween Havoc Sid was cheered by the older adult audience in his match with Sting. After Col. Rob accidentally cost Sid the match, he turned on Parker the following week and became a face. WCW was planning on doing Sid vs Vader at Starrcade. But in October on a tour of London, Sid and Arn Anderson got into their infamous brawl that resulted in both men stabbing each other with a pair of scissors. Sid started the brawl, and was subsequently fired from WCW.

WCW taped their TV months in advance at this point. Sid would have won the WCW title at Starrcade. Could Sid have held the World title all the way to Hogan’s debut in 1994? You could have then held off Hogan vs Flair until Starrcade of that year. Now, the Flair vs Vader match we got at Starrcade 93 was great. But the idea of a Sid vs Vader match is intriguing to me, and is once again a what if in the storied career of Sid. The match happened later in both men’s careers but by that point it didn’t have the heat it could have had here.

Sid wouldn’t return to the spotlight until 1995 when he became the bodyguard of Shawn Michaels in the build up to his match against Diesel at Wrestlemania XI. Michaels blamed Sid for his loss, and on the next RAW Sid turned on Michaels and power bombed him multiple times. The goal here was to turn the Heartbreak Kid face, but initially the crowd cheered Sid. It wasn’t until Diesel made the save that the crowd got behind Michaels.

After that Sid joined the Million Dollar Corporation in 1995 and really didn’t do much. After leaving the company briefly at the end of the year due to a neck injury, Sid returned in July 1996 to team with Michaels and Ahmed Johnson at In Your House: International Incident in 1996. If you read my review of the show, you know that Sid once again was heavily cheered in the match. I would say even more so than Michaels. Sid became #1 contender for the WWF Championship going into Survivor Series. And in one of the more famous moments in Madison Square Garden history, Sid was heavily cheered over Michaels. Despite attacking Jose Lothario, the crowd popped for Sid as he won the WWF title.

Sid would lose the title back to Michaels but get it back in early 1997 until losing it to Undertaker at Wrestlemania 13. Sid would leave the company again in the summer of 1997 due to a neck injury. But could you have imagined Sid during the Attitude Era? With how the fans flocked to Sid throughout his career I think he would have been a perfect fit in the WWF during this time. This era wasn’t about your in ring skills. It was about how you connected with the audience. And it was quite clear Sid had that connection.

In 1999 Sid made some appearances for ECW, but would make his mark again when he returned to WCW. This is when he took on the “Millennium Man” gimmick and would claim to have an undefeated streak that rivaled Goldberg’s. Of course these numbers were inflated, but Sid seriously made this gimmick work. WCW in 1999 gets a bad rap, but they booked Sid perfectly. His first match with Goldberg felt like a big deal. And once again, Sid had cheers against Goldberg. They weren’t overwhelming like at other points in his career, but they were there. The match at Halloween Havoc was short but good. It felt like a legit fight, and Sid lost because of a ref stoppage. Sid was busted open before the fight and bled heavily during it.

Sid became WCW Champion in 2000 and would hold the gold until the New Blood angle stripped everyone of the Titles. Sid vanished after, then came back at the end of the year and unsuccessfully challenged Scott Steiner in the main event of Starrcade. Then we all know what happened at WCW Sin in 2001. Sid jumped off the top rope and snapped his leg, breaking his tibia and fibula.

Would Sid have returned to WWE once the purchase of WCW went through? Vince McMahon seemed to have a soft spot for Sid and I could have seen a possible return at some point. But Sid’s leg injury pretty much ended that hope. How about a Sid vs Kane match at this point? Or Sid vs American Badass Undertaker? And if I’m being honest, the idea of Sid doing a promo battle with The Rock sounds like it would be fun.

The story of Sycho Sid might be one of the biggest “What Could Have Been” stories in the history of pro wrestling. When you go through the entire career of Sid, there is no denying he had a connection with fans. The guy had a certain charisma that the fans loved. I for one love watching Sid promos. Sid would always go from calm and cool, to loud and angry, then back to calm and cool like it was nothing. That was a unique Sid trait that no other wrestler had at the time. It made Sid stand out.

When it comes to in ring work, Sid was passable. If you put him in the ring with the right opponent Sid was a serviceable big man. But I always look back at Sid’s career and wonder if things went differently, could he have been one of the best big men ever? If Sid put away the softball bat and put all of his focus into coming a better professional wrestler, I think he could have been. Sid’s look, charisma and promo skills were there. He just needed to take one more step in his dedication to the in ring work to get there.