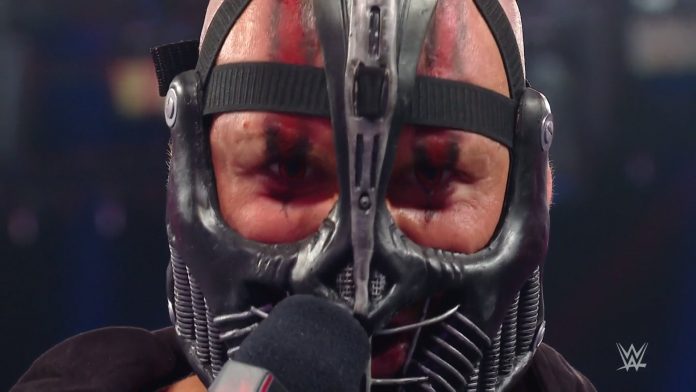 After months of speculation, Retribution made their official debut on Raw, opening the show with an in-ring promo to declare their intentions, but the segment muddied the waters more than anything else.

Mia Yim, Dio Madden, Dominick Dijikovik, Mercedes Martinez, and Shane Thorne stormed the ring wearing masks that made them look like Batman villains or that they were too early for a Halloween party. It looked hokey, not threatening or intimidating. Plus, Bray Wyatt more or less has a monopoly on the over-the-top creepy mask gimmick.

I’ve written about it several times during the course of this year, but the lack of logic and plain common sense of the product was on full display during this segment. The scripting of this stable has already contradicted itself and it will hinder more than help these athletes on the main roster. Mia Yim, who looked very uncomfortable trying to adjust the mask during the promo, said that Retribution signed their WWE contracts. Full stop. A previous promo from a few weeks ago specifically said that Retribution were competitors from the WWE Performance Center, and it’s VERY obvious that despite the new names (more on that later) that these were wrestlers previously seen on NXT so how exactly were they just signed to a WWE contract? Is the audience supposed to ignore the fact that they’ve already seen or at least heard of Martinez, Yim, Dijikovik, and Dio on WWE programming before? Does management expect viewers not to know this is the same crew they’ve seen from NXT? A bigger point, if Retribution’s directly stated goal is to destroy the main WWE brands, why would they be offered contracts? Why would they want contracts if they are so dissatisfied with the state of the company?

Look, I get that it’s professional wrestling and you can stretch the limits of logic to fit a narrative, but when there are so many holes at the basis of a storyline, how does it gain any momentum? The lack of logic, not to mention the cartoonish masks, makes the audience roll their eyes, not invest themselves in the angle.

Another major contradiction was Dijikovik’s portion of the promo where he condemns the main roster for working for the WWE money, but yet the entire stable has acknowledged they signed WWE contracts so how exactly do they have a gripe with the main roster if they are making the same money now?

In the main event, Retribution had a match against The Hurt Business, and it was revealed that their names were Mace, T-Bar, and Slap Jack. How many hokey gimmicks are the writing team going to pile on this stable for them to have to overcome to actually get over?

Again, this comes off like a recycled Nexus angle with Bray Wyatt’s gimmick. Speaking of the Nexus, are viewers supposed to believe that Retribution are actually going to make a dent in the WWE? A storyline like this has baby faces and heels fighting together for common goal of WWE, which sidelines other existing angles to some level so the storyline by nature has a limited time frame. Are wrestlers that are feuding with one another on Raw going to set their differences aside for months to battle the new stable? Furthermore, we’ve seen this group attack Smackdown in the past, but without much explanation, it appears that they’ve restricted themselves to Raw. How is this a “hostile takeover” of WWE if the faction is only concerned with one brand? Couldn’t the entire Smackdown roster just show up to even the odds? Wrestlers have appeared on both shows for months so the brand extension doesn’t limit competitors to specific shows.

If you’ve read this far, (and I thank you) you can tell that I’m not thrilled with where this angle is going, but I can assume you, this isn’t an attempt to criticize WWE just to jump on the social media bandwagon. The biggest problem with this presentation is that it’s a rather needless attempt to put the “WWE stamp” on this group of wrestlers, and this portrayal might ruin their chance to make a solid first impression to a bigger audience when they might’ve been better off otherwise. Dio Madden had a few weeks at the commentary desk and Shane Thore wasn’t prominently used on NXT so they might be the exception, but did the three main athletes in this stable actually need to be repackaged? Was there any indication that Dijikovik needed a Bane mask to get over on the main roster? Did either Martinez or Mia need a new gimmick? Specifically, those three had a working formula already and it suited them so why dilute that? Dijikovik didn’t exactly cut the best promos, but perhaps the persona as the incredible athlete that defied expectations of a big man was the best option for Dijikovik on the main roster. Mia Yim as the ““Blasian Baddie” with the hip hop inspired persona was a unique presentation that worked for her. Martinez as the tough veteran with some of an MMA influence was a character that she did well and she looked like a legitimate combat sports athlete.

The comparison I will draw here is that for years, even as far back as his original stint with the company, management tried to shoehorn Bobby Lashley into a persona that went outside the realm of just his incredible athletic ability. This included the horrendous promos about his sisters, singing on the mic, or the awful Lana storyline. It jumped the shark and got too far outside of the lines of who Lashley is, and more importantly, how to effectively maximize it. The guy trained for the Olympics and MMA record of 15-2, why was the goofy angle with Lana needed? Keep in mind, his membership in The Hurt Business, a role that plays to his previously mentioned strengths, is arguably the best run of his career.

In the same way, I think the Retribution gimmick is unnecessarily putting some talented performers outside of their elements when they already had a formula that worked. Mace, T-Bar, and Slap Jack are now “Raw branded,” but let’s keep in mind at a time when ratings are sluggish, the goal is ultimately to draw money. If a product sells then any criticism is moot. Just from the genetic names, does Mace, T-Bar, or Slap Jack sound like someone the audience is willing to pay to watch? Any big money matches at Wrestlemania with the name Slap Jack on the marquee?