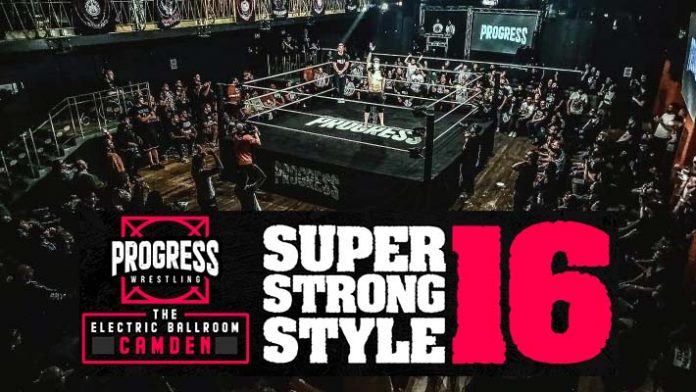 Well, what a weekend in the UK, eh? And I’m not talking about the Platinum Jubilee!

I’m of course talking about Progress Wrestling’s annual 16 man tournament, returning after a 2 year absence, with this year’s tourney being even more important as the winner would become Progress World Champion!

Yet, the tournament wasn’t the only draw to attending 3 excellent days of wrestling at Camden’s Electric Ballroom, as every one of the company’s titles was on the line on different days, as well as the culmination of one of the greatest feuds in British wrestling history.

Here, I break down my top 5 moments from over the 3 days.

Over the weekend, Luke Jacobs showed that he is the future of British wrestling. This young man is a hard-hitting force and backs up his words, clearly shown by the way he dealt with both Big Guns Joe and Axel Tischer this weekend.

Jacobs can hit and I personally feel that with every match on a big stage, he shows that the Atlas title is just the start of what he can achieve in the promotion. 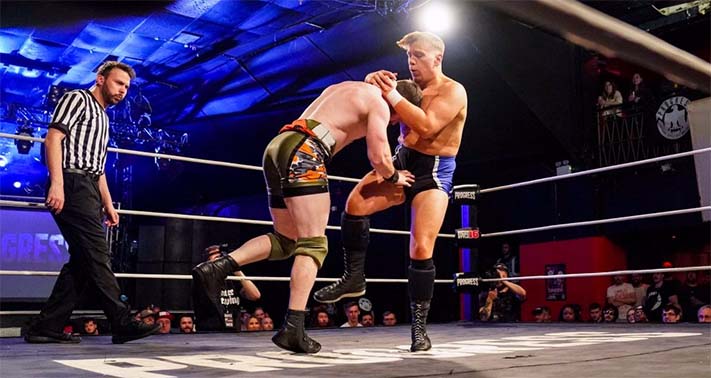 The match with Tischer on day 3 was an incredible match with brutal slapping at its finest, with the young champ backing up his words from day 2 when Tischer confronted him. 3, yes 3, lariats saw off Tischer after a match where you felt every hit in the crowd, with the post-match standing ovation almost needed to shake off the pain. With two impressive outings, could we see a title unification down the line for Luke Jacobs? It wouldn’t feel out of place, I tell you that.

Two women at the top of their game put on a masterclass in this best of 3 falls match. Shaw carries herself like the champion she is and Kanji has all the ability in the world to become the hungry contender who will take the throne.

Both got the first two falls, Shaw with an early tactical tap out (always good to see) all before Kanji leveled it up. Then it got brutal with the challenger thrown through a pile of chairs outside the ring. 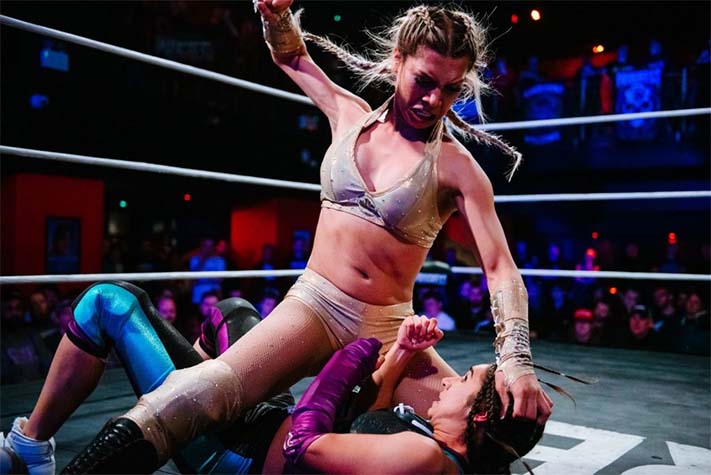 But like the young, hungry fighter she is, Kanji got up and…

Via triangle submission, Kanji has become the new Progress Women’s Champion. Shaw has done a great job with the belt but it is great to see a young, British wrestler get the chance to be at the top of the women’s roster. Where the division goes now will be very interesting as I believe it’s a division that will begin to grow and have some exciting new additions to it in the near future, alongside the current crop that are doing a great job. Will Lana get a title shot? She will definitely let you know that she wants it! 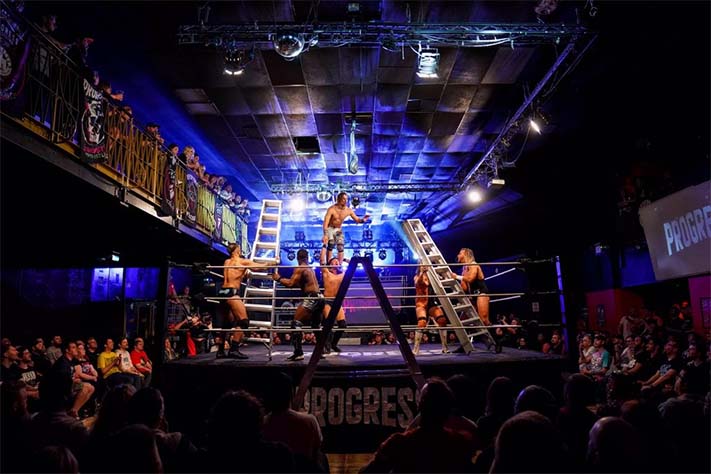 This most anticipated matchup began on day 2 and set a bar incredibly high. All 3 teams, Sunshine Machine, Smokin’ Aces, and the defending champs, The 0121, have been highlighting how good tag wrestling is in the UK at the moment, so it seemed right that each should have the spotlight on them during a match that many will not forget. 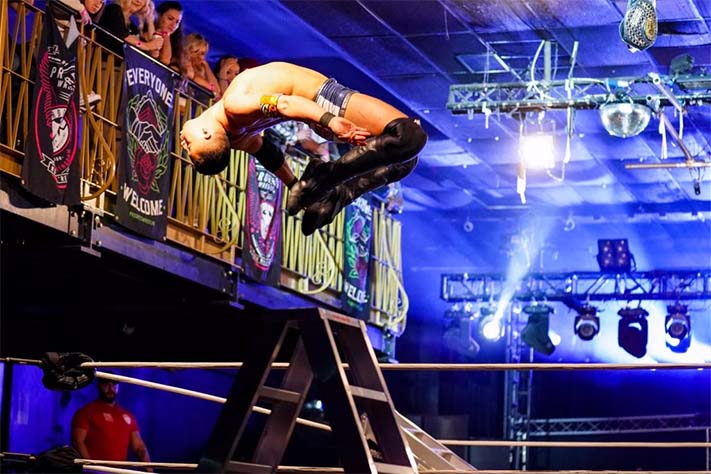 High risks, crazy bumps, and ultimate sacrifices were clear to see in a match where the crowd were off their feet (including a closing standing ovation) however, it was brilliant to see TK Cooper and Chuck Mambo win the titles.

These two have been staples of Progress Wrestling for over 7 years and deserve every success due to their hard work, likable personalities and fantastic talent, both individually and as a team. I want to see these 3 teams get it on more though as there is no doubt, they can all go places.

I spoke to Spike for PWMania before his match with Cara Noir in May where it was clear to see the man was set to do anything he had to in order to make Cara Noir pay the ultimate price. This happened in the most violent, barbaric, and emotional matches I have ever seen live. This was the end of one of Progress Wrestling’s best-ever feuds. For me, the greatest British wrestling match I have ever seen live! 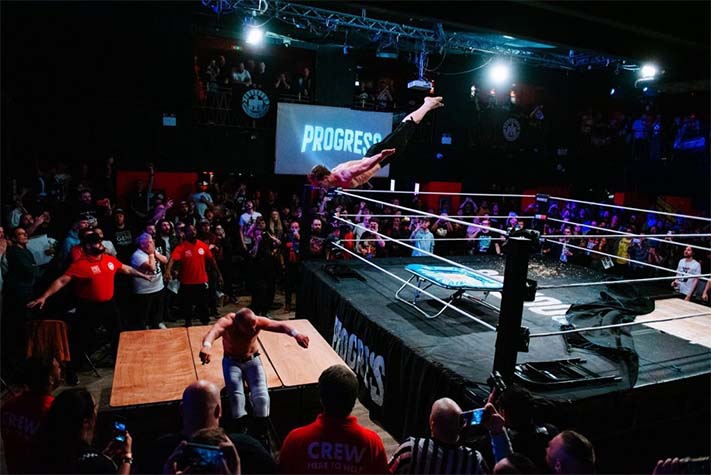 The two went toe to toe, hell-bent on battering one another. Dives out of the ring using trampolines, limbs tucked into and smashed by chairs and finally, a horrid threat that caused fan favorite Cara Noir to say ‘I Quit’. It was sick, it was sad, but it was Spike and he doesn’t give a shit.

The crowd were on their edge and you could literally feel the air sucked out of the room at the match’s finale. Whatever happens down the line, nobody can say anything but #ThankYouCara to a wrestler who, during the world’s toughest times, defended his title and put on shows that kept people entertained and enthusiastic about the product. He is everything and deserves the best. As for Spike, I’m worried because what will this guy do next? Well, day 3 highlighted that…

Cara is gone, but Tom Dawkins remains. Spike offered Dawkins the chance to wrestle as himself, with the Cara Noir gimmick belonging to Trivet.

Tom accepted and took a pair of boots, something Cara never wore. He carries on, but will he have the same enthusiasm and appeal? Methinks this is far from over.

Charles Crowley is a star in the making

Munny did himself proud…very proud

The amazing show recaps and backstage segments that weave feuds together and give each event a big fight feel. Love these!!!

16 competitors, 15 matches, and 2 men left in the final. Warren Banks and Chris Ridgeway have both shown great credentials as to why they deserve to be the champ. Both have shone in the Ballroom, pre and post-pandemic and they deserved the spotlight at the culmination of this weekend.

Banks vs Johnny Progress stood out on day 3 whilst Ridgeway did a professional job against Gene Munny to get to the final. And what a match to cap off the weekend. 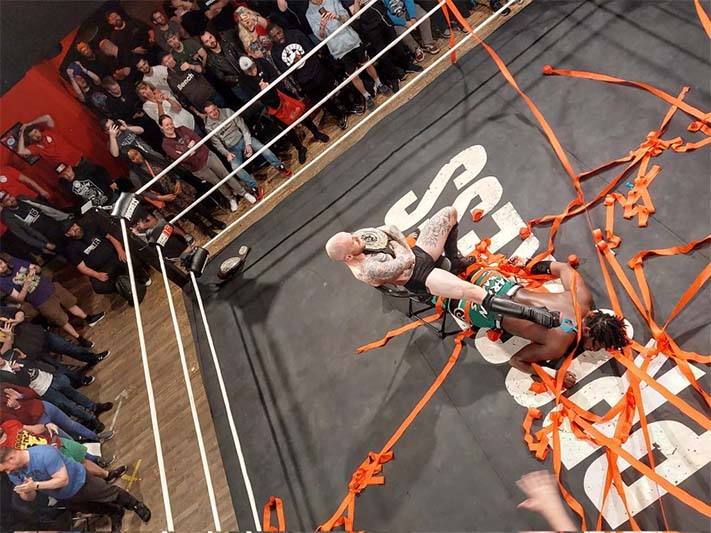 The match was a good one, one where two wrestlers – who had given it there all the whole weekend – gave every drop they had. But, after a few failed attempts, Chris Ridgeway has finally done it. The guy looked good enough when he lost to WALTER back in 2019, but now, it’s his time.

And that’s that. What a weekend. I have nothing but respect for the roster, Lee McAteer, and the full Progress team. They are ushering in a new era of British pro wrestling and I think they deserve huge respect for that. There have been some voices online that seem to want to talk about the product (even though in every tweet or post they highlight they don’t want to know, hmm…) but honestly, forget them, it’s pro wrestling, it’s brilliant pro wrestling and long may it continue.

Watch out for these shows dropping on Peacock and the WWE Network in the very near future. See you all at the Ballroom in July!

This Is Progress and I’m glad it is!