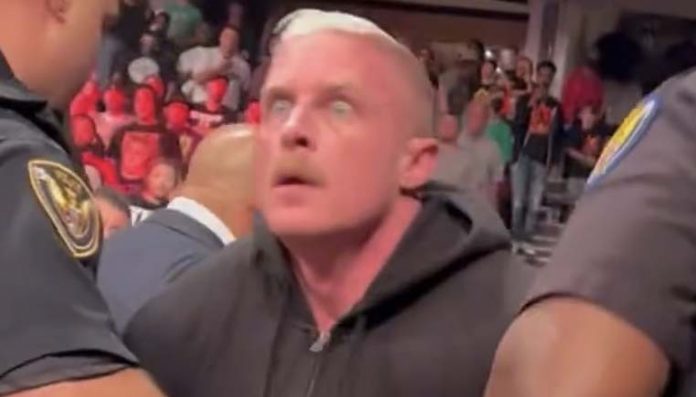 Last week on Smackdown, we saw the return of Karrion Kross with Scarlet by his side, another comeback associated with the Triple H regime, and another return took place on last night’s Raw with the cameo from Dexter Lumis, one of the dozens of performers released during the pandemic era due to “budget cuts.”

Interestingly, the returns of Kross and Lumis come around the same time of the news that John Laurinaitis, the former Head of Talent Relations, was quietly fired after he was originally placed on administrative leave for his involvement in the sexual misconduct scandal that created shock waves around the company. With the exit of Johnny Ace, it’s very clear that the McMahon team and thus his influence is being phased out of the organization. That’s not a major revelation either, as every change of a booker usually brings with it a new crew, something that happened often in the territory era off the business. A side note, I’d expect Bruce Prichard to be political enough to keep his spot, but Kevin Dunn has to be nervous in the production truck.

As far as Kross and Lumis, it’s important to keep in mind that the “debut pop” is easy, the crowd and social media will have a reaction for a return, but the key to all of it is how these talents fit into the bigger picture of Raw and if there’s a meaningful plan for them going forward on each brand. For example, one of the rightful criticisms of All Elite Wrestling is that Tony Khan gives out contracts the way that Oprah gives away cars. You see a focus on a new talent for two or three weeks and then that performer gets lost in the shuffle with a dozen other names on a Youtube show that most people don’t watch. Along the same lines, Triple H must have a plan for these returning stars, which we saw with the Bayley faction involved in the Women’s Tag Team title tournament, for these comebacks to be anything more than an artificial pop for a week.

As far as Kross, opinions vary on him and how much he brings to the table, but all things considered, we haven’t seen a full-fledged push for him on this stage before so you can’t really judge until the results of this current run are factored into the equation. Kross made a name for himself working in Mexico and had a stint in Impact, and while he had a level of intensity because Impact was such a small pond, he didn’t necessarily jump off the page as a major talent. That’s why I was surprised when he originally surfaced in NXT in 2020, mostly because the company had already signed several top names from the indies at the time, but the entrance and presentation made him look like a major star.

In truth, Kross’ run in NXT didn’t have the time to properly develop, as he was only on the brand for a little more than a year and about four months of that time was spent on the shelf with a shoulder injury. In fact, he originally hurt his shoulder in the match where he won the title so he quite literally didn’t have a championship reign. He recaptured the belt briefly when he was back from the injury, but dropped it after he debuted on Raw, where he lost to Jeff Hardy in roughly two minutes. for all intents and purposes, the Karrion Kross character was ruined after that point. NXT champion or not, the message was sent on the biggest stage possible in WWE that Kross wasn’t a threat. The fact that he was given the goofy gladiator outfit a few weeks later and didn’t have Scarlet as his valet sealed his fate of being released. Again, opinions vary on how much potential Kross brings to the table as a possible top talent, but the bottom line is, the scripting of his main roster run destroyed any chance he had of being successful. The time away from the company was beneficial because it created some distance between the new look that he has now and the ridiculous helmet from the last time the audience saw him on television. Kross made an appearance during a Roman Reigns segment, implying that he might be in line to work with the champion, and that’s a bold leap, but we know that Roman needs fresh opponents, at least until Cody Rhodes can return from the pec injury.

I wouldn’t necessarily bet the world on Kross getting over as a threat to Reigns’ title, but I think it’s at least possible with the right presentation. The potential for it is there, particularly based on his intensity, but the determine factor is if the booking can continue to distance him from the goofy visual from before, and portray him as a dangerous competitor.

Maybe I’m missing something about Dexter Lumis, but I just don’t see the hype or what the organization might be missing if he didn’t get re-signed. The former Samuel Shaw does decent promos and he’s decent in the ring, but outside of that I don’t get what would make him a priority talent. Don’t get me wrong, if Lumis can get another WWE deal for good money then good for him, I’m just not sure he would be at the top of the list of the guys to re-sign from the pandemic budget cuts.

However, in my view, the bigger story was how Lumis was brought back into the fold and what that could be an indication of for the product. Lumis was seen in the background being led away by security on Raw. It was a subtle angle that created intrigue because it wasn’t the usual blatant WWE trope from the playbook. Sure, the fans figured it out and it was mentioned on social media so it’s not a build up to a major reveal, but the point is that it allowed for a segment that got people talking about the show, and thus a reason to tune into the show because you don’t know what’s going to happen. For too long, there was a WWE formula that was so recycled and predictable that you could skip a month of Raw and not actually miss any progress of the show. At the very least, the attempt to give the viewing audience angles that progress week to week is more of an incentive to tune in on a regular basis.

It’s easy to get the positive feedback for the returns because it most cases, the audience will initially pop for the return regardless of who it is, but so far the Triple H booking style has kept the product moving at a better pace than we’ve seen previously. It will be interesting to see how Kross and Lumis develop on each brand and how successful they are under the Triple H management of the company.