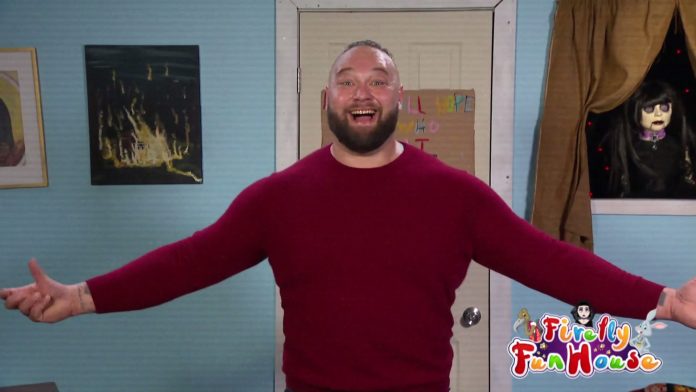 In an interview with The Metro, makeup effects artist and WWE collaborator Jason Baker talked about the production of the Firefly Funhouse segments in WWE. Baker talked about how he got involved with Bray Wyatt (Windham Rotunda) through Erick Rowan:

“[Erick] hit me with new ideas, we’d make variations, and then I’d travel and them to him. Every time I’d see him – Windham’s obviously a huge horror fan, and we’d chat about movies and this and that, we’d talk about collaborating on things and it just never really clicked. We kind of built this friendship for years and we’d just chat. Then we started working with other people like Kalisto and Luke Harper, and then just out of the blue one day, I got a call from Windham. He was like, ‘Hey. I got this idea.’ ‘I was like, ‘Alright, what’s up?’ He’s like, ‘I kinda wanna do a kid’s TV host with a twist.’ We stayed up till two, three in the morning just chatting about what we could do, what we should do, what we probably couldn’t do. We’re probably not gonna get away with that, so we should just drop this idea now’. Just things like that. But there was some potential for other characters, other puppets, other looks, other things. That’s the thing – we were always just trying to add something new to it, something fresh, and just keep it going.”

Baker also commented on Vince McMahon allowing them to have creative freedom:

“I wasn’t there every week, I wasn’t there all the time. But I will say this, a lot of times guys like Vince would listen to ideas. They’d really take it under consideration and allow us to run rampant with a lot of things. At a particular time, I remember when we first started it, there was a time when we could just do whatever we wanted and Vince was like, ‘OK guys, I trust you!’ I don’t know the ins or outs of what happened or what went down, but he was very open. He listened to us, he listened to ideas. I think that’s definitely credit to him!”