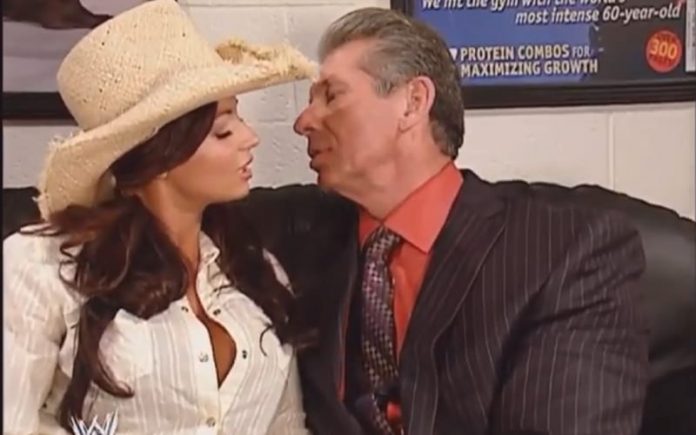 Candice Michelle talked about the romantic storyline with Vince McMahon and kissing him, in an interview with WrestlingInc.com:

“I remember it was awkward. I do think there was like two, maybe three, I don’t quite remember to be honest. But also it was how it was back then. I remember it just kind of trickled down from girl to girl. Everybody kind of went through that. Even though it’s awkward to do, it was just part of my job. There was no intimacy, we didn’t think of it like we’re actresses and we’re going to win an Emmy nomination or something. We’re young and we’re dumb and we’re innocent, and we’re happy to be working. That’s just part of it.”

“Most of it I did not like. The worst match ever in my life is the pudding match. I mean, that is just like, we had pudding in our ears! Anytime we were given a match, we took it as an opportunity. All the women there did. ‘Pudding match? Okay, great. How do I body slam you into pudding, I can’t even pick you up out of the pudding!’ I’m trying to do a DDT in the pudding, and I’m just like, this looks terrible. Probably the world’s biggest rib on us ever. But it was part of building that tenacity. I never felt like I was at a point to where I was like, ‘No, I’m not doing that.’”