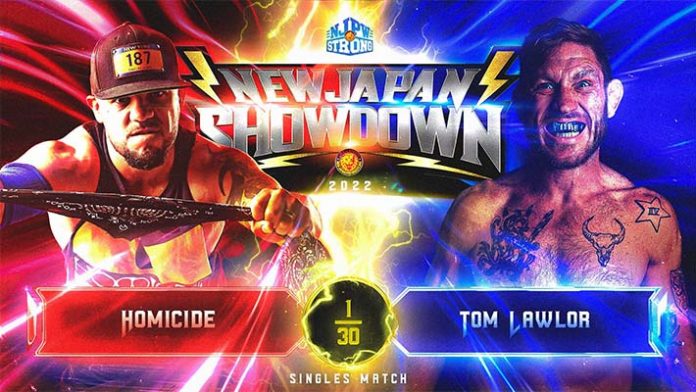 Before the match Peter Avalon took the mic & made a blue pants reference then he offered Keita the mix but it was a ruse as an enzuigiri took Keita down, as a death valley driver at the bell looked to end this one early.

Keita kicks away a Golden Arch then clotheslines Avalon to the unlit outside for a tope. Back inside, a back suplex plants Avalon for a two count then they traded chops, before an atomic drop from Keita had Avalon rocked.

Avalon’s hung up in the ropes with a Stun Gun as Keita looked to push ahead, only to get pulled down off the top rope. A back elbow from Avalon got him back in it, while a chinlock was forced out of by Keita only to get caught with a side suplex seconds later. Heading into the corner, Keita’s able to find a way in with a roll up and some thrust kicks, before a uranage backbreaker from Keita almost got the win.

A springboard dropkick gets Avalon back into the match, following up with a tope to the outside and a slingshot knee drop back in for a two count. Keita’s again caught up top, but he fought off Avalon and hit the Keita The City tornado suplex then the Money Clip up kick and a gutwrench facebuster keeps Keita ahead only for kicks from Avalon to wear down Keita ahead of the Golden Arch.

Keita makes it to the ropes to force a break, as a Tiger Driver and an elevated Boston Crab saw him go for a win but Avalon cradled out of it for a two count. Another enzuigiri drops Keita, and from there the Golden Arch is back on & Keita had no choice but to tap out.

Match starts off with a side headlock from Chris Bey’s pushed off by Blake Christian, who popped up from a shoulder block as the pace quickly ratcheted up with Christian missing a standing moonsault before scoring a gamengiri in the corner. A roll through enzuigiri gets Christian a one count, as Mascara Dorada came in to get a two count out of a dropkick.

El Phantasmo tags in after that, taking a springboard crossbody and a slingblade bulldog before a rope walk dropkick had ELP bouncing across the ring. They trade chops from there, which led to Bey and Christian coming in to help out Dorada & ELP take to the ropes to continue their chopping, but the Bullet Club end up on the outside ahead of an assisted senton from Dorada to the outside.

Christian joins in with an Arabian press to the outside, landing on Bullet Club for a pair of reverse DDTs too. Back inside, ELP escapes Dorada and took him into the corner as the Bullet Club took over with a pair of Gas Pedals to Dorada in the corner. Bullet Club continue with a slam and a senton atomico.

ELP keeps it going with a cartwheel splash into the corner, only for Dorada to hit back with a wacky DDT into the turnbuckle pad. Christian tags in to hit a handspring enzuigiri to Bey, then a dropkick to ELP through the ropes before he pulled himself back into the ring for a one man Spanish Fly for a near fall.

Dorada’s back, but can’t avoid a springboard Complete Shot that nearly ended it. Bey misses a splash into the corner as Dorada came back with a springboard elbow drop for a two count Christian’s back in to hit a rolling Death Valley Driver to Bey, before his trip up top led to Juice Robinson throwing his drink at Christian.

Homicide avoids an early kick from Tom Lawlor early on as they proceeded to lock up, heading to the mat before Homicide grabbed the ropes as Lawlor went for the legs. Riling up Homicide perhaps wasn’t a smart move as Homicide slapped back, then stuffed a takedown attempt, before Lawlor tied him up for a side surfboard stretch, snapping back on the arm.

Homicide’s right back up though and went after Lawlor’s ankle, but they’re taken into the corner as Lawlor caught Homicide with shoulder charges. Some biting to the ear from Homicide breaks up whatever Lawlor was doing, only for Lawlor to pull him down into another armbar, before he snapped on a hammerlock.

Lawlor’s latest armbar ends in the ropes, as Homicide threw a right hand only for a dragon screw from Lawlor to take things back to the mat. A Figure 4 follows, but again Homicide’s able to block the hold, as Lawlor instead tries for a Kimura as the pair were tied up on the mat. Homicide switches in for a STF, but Lawlor resists and takes the back with a rear naked choke as he rolled Homicide into the middle of the ring only for them to keep on rolling through to the outside.

Picking up on the floor, Homicide spikes Lawlor with a piledriver on the outside. A 2nd one’s blocked as Lawlor caught Homicide with a kick instead, leading to a double count out tease that both men fortunately beat in the nick of time. Homicide & Lawlor resume slapping the taste out of each other’s mouths back in the ring before Homicide went to the eyes as he upped the ante.

Homicide headed to the corner as the referee checked on Lawlor and returned with a fork then he stabs it into the corner pad before he tried to ram Lawlor eyes first into the fork handle, but Lawlor blocks as he instead pulled Homicide into a takedown for a two count. A Rings Of Saturn follows, tying up Homicide before they again rolled into the ropes for a break.

Elbows from Lawlor ended up with Homicide ducking an enzuigiri to land a cutter in return for a near fall. The fork’s still in the corner pad but Lawlor propelled off of the corner pad for a mounted guillotine, only for Homicide to back them up into the fork. An avalanche cutter off the top’s caught and turned into a rear naked choke by Lawlor, but Homicide bites his way free before he caught Lawlor with a knee strike.

A Cop Killa’s floated out of as Lawlor went back to the rear naked choke, only for Homicide to push free and catch Lawlor with the Eastern Lariat for the win.

Homicide closes in on victory, but @FilthyTomLawlor has a counter up his sleeve!

KEiTA the City for @KEiTAyourHeart! 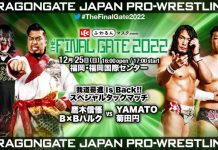 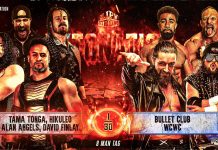