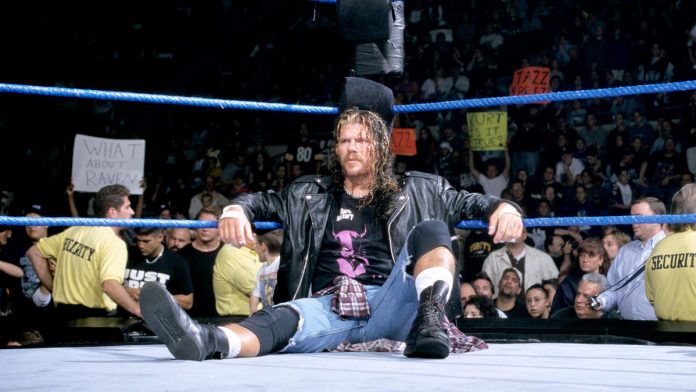 The legendary Raven has been confirmed for Impact Wrestling’s upcoming Against All Odds special event.

As PWMania.com previously reported, Impact has scheduled Moose vs. Sami Callihan for Friday’s Against All Odds event in Raven’s Clockwork Orange House of Fun match. The storyline for Raven’s “most sadistic creation,” which is making a comeback, is that Raven called Callihan and demanded this kind of bout after Moose knocked him out on last week’s Impact as the follow-up to Slammiversary. The expectation is that this match will be more bloody than their Monster’s Ball match, which Callihan won at Slammiversary.

Impact has officially revealed that Raven will make a live appearance at Against All Odds.

Impact mentioned in their statement, “This Friday at Against All Odds, Moose and Sami Callihan look to settle their heated rivalry in the Clockwork Orange House of Fun. And we can now confirm that the inventor of the match, IMPACT Wrestling veteran Raven, is set to make an appearance! What does he have in store for the competitors in what can only be described as one of the most hardcore, extreme match types in all of professional wrestling?”

The Clockwork House of Fun match, which was legitimately developed by Raven while he was with TNA, was also known as Raven’s House of Fun or the House of Fun match. In the singles match, there are poles about 5 to 6 feet up on the ring post with steel chains surrounding the posts and the ring as well as numerous weapons hanging from and attached to the chains above the ring. In addition, the ring occasionally has steel cage sides connected to it as well as weapons outside the ring. Normally, the only way to win the bout is to throw your opponent from a scaffold through two tables, although the Falls Count Anywhere stipulation has also been applied. Raven used a version of the match in WCW, dubbed the Bowery Death Match.

The victories by Raven over The Sandman on the March 5, 2003 NWA-TNA show, CM Punk on the September 6, 2003 at ROH Beating The Odds show, and Sean Waltman at TNA Hard Justice 2005 were notable House of Fun matches. There have also been tag team variations of the contest, as well as a Handicap Match on the NWA-TNA show on April 16, 2003, in which Mickie James and Julio Dinero defeated WWE Hall of Famer Jeff Jarrett. This match at Against All Odds will be the first since 2007.

The Impact Against All Odds 2022 event will air live this Friday, July 1 from Center Stage in Atlanta, GA. The event will air on Impact Plus and on YouTube for Ultimate Insiders members. Here is the latest card: