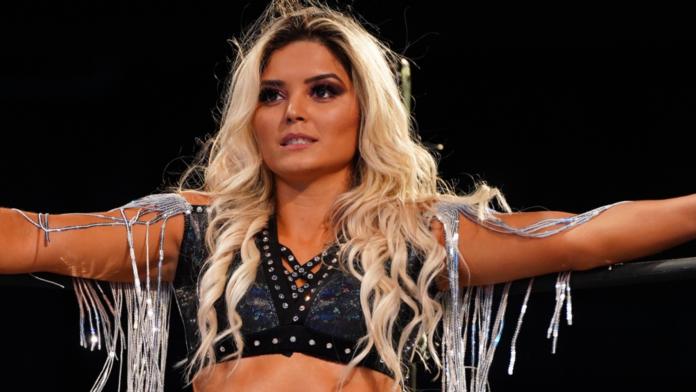 In an interview with Mike Johnson of PWInsider.com, Tay Conti was asked about how her experiences in the AEW locker room have been different from her time in WWE NXT:

“I felt because everybody has different experience, right? For me, towards to the end, was super bad in WWE because I felt like they have this unnecessary pressure. The business is already a lot of pressure. We are on TV, real life and then everything that we need to go to, it’s already a lot. And over there, it was just this extra stuff that was not necessary. I hated that sometimes I was like, oh, should I say hi? Can I try to give a high five to this person or I’m getting fired because I did it? It’s just, the whole unnecessary pressure that it made. In AEW, it doesn’t exist. Here, we can be us first, that we have the same kind of the same pressure, because it’s live TV, that’s the job. We need to be led by it. So to have people helping us, it’s like, hey, you can do it. Hey, you are going to do a great job. Do you need help? That’s how I feel here. We support each other and that’s the most important part. We all want to see everyone succeed. That’s the right kind of, like, competition here and that’s what makes me feel appreciated.”

Conti also commented on turning down her first opportunity to get into wrestling:

“Well, I said no, because I didn’t even know what wrestling was. So I said no for the first time, because I was trying out for the elite gang in judo and then I lost. And then out of nowhere, it came with this opportunity to try out for WWE. And I’m like, I don’t know what WWE is. I never watched wrestling before. Never, ever. I had no idea. So everything was so new, I said no, the first time. And then they keep trying. And then I finally was looking into it. And then I asked a friend, he was there in WWE by that time, and I knew him from like martial arts competition, and wrestling. Then he was like, no, it’s a great opportunity. Just try it. I’m like, okay, so that’s when I decided to do it. But, even when I got signed, I had no idea what I was doing, with no English. I felt for me, because of my athletic mentality, I was like, that’s a competition and I want to win. That was me, my tryout. And then I feel like I just realized what wrestling was after my second Mae Young classic. I was like, oh my God, now I get it because for me, it was super hard to understand in the beginning, but after, I was like, okay, I love this. It’s pretty much the same life I had in judo, but I need to learn more. And then I had to challenge myself with English to communicate in Spanish because I did learn Spanish too. So the whole opportunity was great, not just for my career, but for my life.”