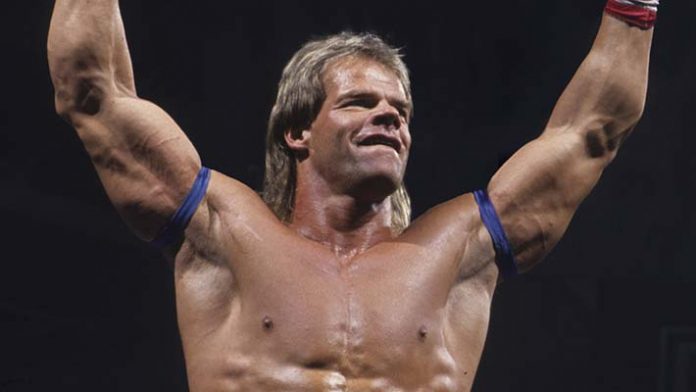 WWE Legend Lex Luger recently appeared on Busted Open Radio for an in-depth interview covering all things pro wrestling. During the discussion, Luger was asked again about a possible Hall Of Fame induction and he was asked how his health is these days.

Luger said, “You know that has crossed my mind a few times. My health is phenomenal. My doctor gives me my annual checkups and blood work and says, ‘Man for all you’ve been through, you have mobility issues from your spinal cord injury. That’ll always be there.’ But he goes, ‘man you stay trim’ and he goes, ‘you are like the healthiest 64 year old I’ve ever had in this office. No medications, you’re not on anything because you are extremely healthy.’ I always will have probably obviously mobility issues. My main thing is I can walk and stand a little bit which is like a less than 1% miracle of God for my type of spinal cord injury – cervical C5 C6. I’m like one of their miracles. I can drive and walk a little bit and dress myself and feed myself. All that stuff was stuff I was never supposed to be able to do. And I’m very thankful for that.”

Luger continued, “I can walk a little bit but what happens is from my injury type I had I don’t know if you guys have had a power surge during an electrical storm. The power would go out just for a second and come right back on. That’s what can happen if I’m walking. If I’m not holding on to something like either a walker or in a wheelchair, I will go down and I found out the hard way…I never have a warning of when it’s just going to come and I always pick the worst places like a crowded movie theater on a Friday night or church on a Sunday morning. I always fall at the worst place, it was embarrassing.”

Luger added, “For my safety, my neurologist told me ‘if you’re going to try to walk around like this you better wear like a bicycle helmet with elbow knee pads all the time.’ Well I go, ‘that would look kind of goofy.’ So I just learn to stay in the chair and use the walker most of the time, especially during appearances and not try to walk and have a power shutdown or from either fatigue or not knowing when it comes. So it’s really more of a safety thing. And, but I can walk a little bit so my health is really good. I’m very thankful for that.”

On the WWE Hall Of Fame, Luger said:

“The Hall of Fame, I’ve heard a lot of rumors about that. The Sports Illustrated guy Justin Barrasso is a great guy. He interviewed me right before the documentary and said, ‘Well, what about the Hall of Fame next year? You think maybe?’ He goes, ‘you might try to walk across the stage for that?’ And I go, ‘Well Justin, I might pop out of my chair for that. I might take the chance.’ If I get the Hall Of Fame, I might. I might try to walk. Maybe I will use a walker, but I might stand up for that one for sure.”

Luger also spoke about being booked to beat Hulk Hogan for the WCW World Title in 1997:

“Well, it definitely felt pretty darn good…That was definitely a huge high point. That was a surprise. I didn’t know that was gonna happen till I was at the building. I used to have nachos and tobacco juice and things thrown at me in the ring as a good guy, because they (NWO) left us laying every night in the ring for a year and a half or wherever it was…I almost started getting like a lot of sympathy for part of my run up the ladder of popularity then as a babyface.”

Lex continued, “Eric and Hogan didn’t tell the rest of the boys really. They took me aside close to the match time and told me ‘we’re gonna put the title on you’ And I go what? Because I knew we were building up Sting. They said, ‘We took the temperature of the fans and we need to give them a little crumb, we need to give them a nugget [and] we’ve left you guys laying for so long. We should give them just a little hope here.’ … Nobody expected it. I didn’t expect it when I went to the building that night. Hogan, what an honor. I always got along pretty good with him but he picked me. What an honor there to put me over in my finish and have me kick out of his finish and had me put him in the rack…The pop was delayed. Even the crowd was like, ‘well this is a Nitro, and nothing’s gonna happen here and they’re gonna DQ it.’ When they realized that we did a title switch, the crowd went nuts. Even the boys in the locker room didn’t know and they went nuts. It really was an incredible moment there in Detroit.”

PWMania.com spoke exclusively to WWE Legend Lex Luger, click here to check out our interview with him.