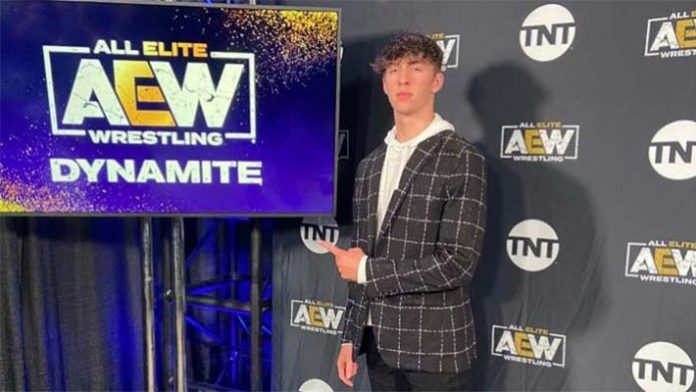 This week on “Talk Is Jericho,” Nick Wayne spoke with Chris Jericho about his rise on the independent scene. Wayne is under contract with AEW but will not make his debut until he turns 18 years old.

“I signed back in February when I was 16 (years old), of last year. As of right now, I can’t do any in-ring work with AEW until I turn 18, which will be this July. So from now until then, or I guess from last February until July, it’s just like a learning experience trying to learn TV wrestling and how AEW does things around here.”

If he gets paid:

How he was signed:

“I didn’t know any of this was going on. I did a show called DEFY Wrestling here in Seattle. I wrestled Christopher Daniels, and after the match, Darby Allin came out. I had no clue he was here in town or anything. He did something with Daniels. Then he got on the microphone. He was talking for a bit. Then he pulled a paper out of his pocket and it was the AEW contract. I said yes in front of the fans, it blew up online, and I was trending like number seven in the world on Twitter for this contract. But yeah, it took me months to realize like that was even real and it felt like I was on cloud nine forever. I still do. I still can’t believe it’s real sometimes.”

How he was able to wrestle in Japan while still in high school:

“I miss school, but when I come back, I just gotta make up all the work. My teachers were pretty cool with it. As long as I stay on top of my grades and on top of the assignments, they’re pretty chill with it.”