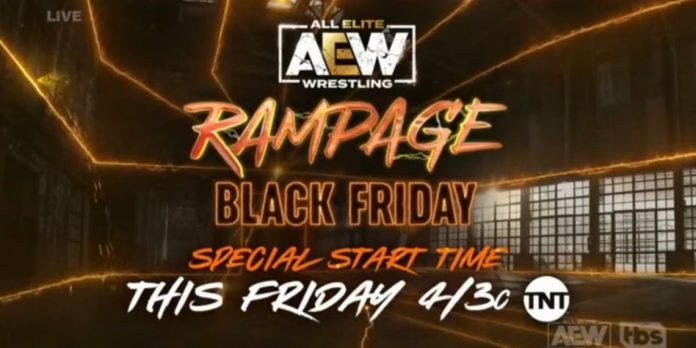 A number of matches have been announced for the Black Friday edition of AEW Rampage on TNT, which will begin at 4pm ET.

Renee Paquette was interviewing Dante Martin and Darius Martin of Top Flight, as well as FTR’s Dax Harwood and Cash Wheeler, during this week’s AEW Dynamite. Harwood was impressed with the tag team of brothers and expressed hope that they would take over tag team wrestling in the next ten years. Darius thanked FTR and then challenged Rampage to a title match. Accepted FTR.

This will be FTR’s fifth ROH strap defense. They defeated The Briscoes at Supercard of Honor XV in April. Since then, they have successfully defended their titles against The Young Bucks on April 6 Dynamite; Trent Beretta and Rocky Romero during the 3 Year Anniversary Dynamite on May 25; Romeretta and Beretta, as well as Jeff Cobb and Great-O-Khan at Forbidden Door on June 26 in the same bout they captured the NJPW titles; The Briscoes in a 2 of 3 Falls match at Death Before Dishonor on July 23; and Toa Liona and Kaun

The Dark Order vs. Rush, The Butcher vs. The Blade feud will continue this Friday with a massive six-man match. The Dark Order will be represented by John Silver, Alex Reynolds, and 10.

Rampage will also feature Darby Allin vs. Anthony Henry. Since his Casket Match victory over Brody King at the Quake By The Lake Dynamite on August 10, Allin has only worked four singles matches. He lost to Sammy Guevara on the September 9 Rampage, then defeated Matt Hardy on the September 16 Rampage, Jay Lethal on the 3 Year Anniversary Dynamite on October 5, and Lethal again on the November 2 Dynamite.

Hikaru Shida will return to the Rampage this week against an opponent yet to be announced. Shida’s most recent Dynamite singles match was a loss to then-Interim AEW Women’s World Champion Toni Storm at the Title Tuesday Dynamite on October 18. She has since worked two tag team matches on Dark and Elevation, and her most recent match was a victory over Layla Luciano at the November 18 Dark tapings.

There’s no word on what Jericho will say during Rampage, but he could announce the main event for the ROH Final Battle pay-per-view on Saturday, December 10.

You can click here for full Rampage spoilers to air on Friday in a special start time.

The current lineup is as follows:

* Hikaru Shida will be in action

* The Dark Order’s John Silver, Alex Reynolds, and 10 vs. Rush, The Butcher and The Blade