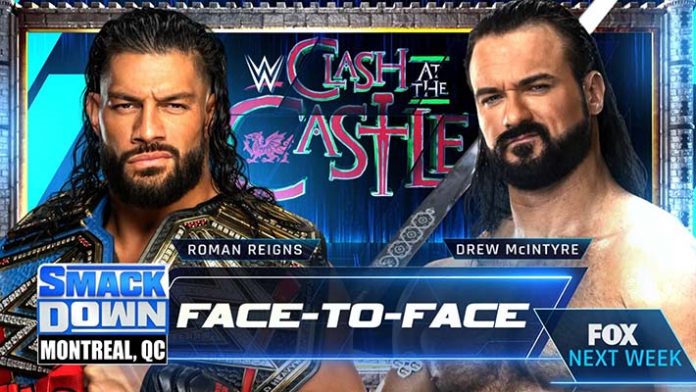 For next week’s SmackDown from Montreal, WWE has confirmed a match and two segments.

Drew McIntyre and Roman Reigns will square up on next Friday’s episode of SmackDown in a Face-Off for the WWE Clash at The Castle main event.

Next Friday night will also see the continuation of The New Day and The Viking Raiders’ lengthy feud. Erik and Ivar will conduct a funeral for The New Day.

The tournament for the vacant WWE Women’s Tag Team Titles will continue next Friday night. According to WWE, Natalya and Sonya Deville will compete against WWE NXT stars Nikkita Lyons and Zoey Stark on the upcoming episode of SmackDown.

Here is the current line-up, along with related clips from tonight:

– The Viking Raiders host a funeral for The New Day

– Nikkita Lyons and Zoey Stark vs. Natalya and Sonya Deville in a first round match in the tournament for the vacant WWE Women’s Tag Team Titles. The winners will advance to the next week’s SmackDown to face Aliyah and Raquel Rodriguez