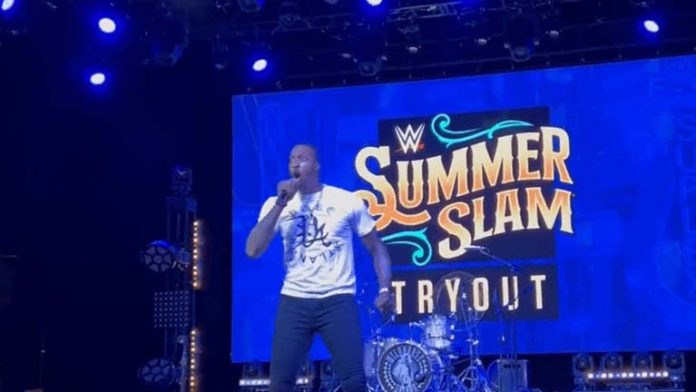 After his basketball career is over, Dwight Howard might have a future in WWE.

The Los Angeles Lakers star unexpectedly attended today’s Nashville tryouts, and according to Arash Markazi, he is serious about joining WWE in the future.

Howard entered the stage to cut a promo as “Sho Nuff, the Shogun master of the South,” as seen in the video below. In his promo, Howard said that if someone attempted to grab “my belt,” he would only succeed in winning “Deez Nuts.” Given that Howard is 36, it is likely that we will see him in a WWE ring fairly soon.

Howard is still active in the NBA. There are reports that he may be leaving the Lakers and joining the Brooklyn Nets.

You can check out a few clips from his tryout below:

Dwight Howard was a surprise participant at the WWE Tryout in Nashville today. He told me he legit wants to join the WWE one day. pic.twitter.com/LiUnNqPsdv

Dwight Howard didn’t just cut this one promo and leave. He’s been here for hours. He’s now cutting promos with the other attendees at the WWE Tryout in Nashville. pic.twitter.com/J9HQQq23cN

Dwight Howard said he would like to play in the NBA next season but is ready to transition and join the WWE if that does not happen. His NBA career began in Orlando and he said he’s open to beginning his WWE career in Orlando where the WWE Performance Center is located. pic.twitter.com/VnT0bA1LCB