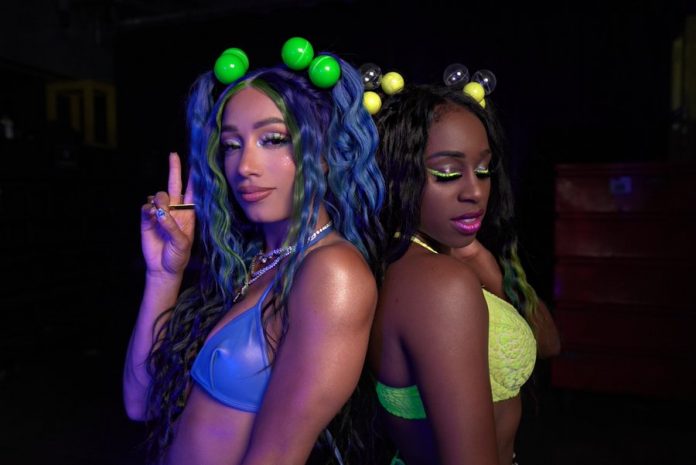 Sasha Banks and Naomi have been placed on indefinite suspension by WWE, and new WWE Women’s Tag Team Champions will be crowned soon.

In an update, Michael Cole addressed the incident on this week’s SmackDown on FOX. Cole said they let everyone down when Banks and Naomi walked out of RAW this past Monday.

Cole explained that Banks and Naomi were supposed to fight in the Six-Pack Challenge with Asuka, Becky Lynch, Doudrop, and Nikki A.S.H. to decide a new #1 challenger to RAW Women’s Champion Bianca Belair, but instead they gave the belts to Head of Talent Relations John Laurinaitis and walked out. Asuka vs. Lynch ended up being the main event, and Asuka won to earn a fight with Belair at WWE Hell In a Cell. The original plan was Naomi to win the main event and then challenge Belair at Hell In a Cell.

Cole also stated that Banks and Naomi had disappointed millions of fans and fellow Superstars, and that they had been suspended indefinitely as a result of their actions on Monday. Cole also revealed that a future tournament will be held to crown the WWE Women’s Tag Team Champions.

There’s no information on when the tournament will take place or how long Banks and Naomi will be suspended.

According to various sources, Banks and Naomi were not backstage for Friday night’s SmackDown in Grand Rapids, Michigan. As of this writing, the pair have not officially reacted on the SmackDown announcement.

The manner WWE made their announcement Friday night was unique and different from what they usually do. While there has been much conjecture that the Banks – Naomi situation is part of a storyline, several sources swear that it is not.

WWE has temporarily removed Sasha and Naomi’s merchandise from WWEShop.com, which was not mentioned on Smackdown. Despite this, Sasha and Naomi have not been released from the company, according to Sean Ross Sapp of Fightful.com.

On Smackdown, Happy Corbin appeared to make a reference to Sasha during his promo about Madcap Moss. The following is what Corbin said:

“You should show your boss total respect. You should never to try to improve your station in life…”

“He [Moss] ate Wagyu beef and I paid for it all. Now, if he wants to eat steak, his nurse has to chew it for him first.”

Stay tuned to PWMania.com for more on Banks and Naomi, and the WWE Women’s Tag Team Titles. Below is footage of the segment with Cole on SmackDown:

Sasha Banks and Naomi have been suspended indefinitely. There will be a future tournament to crown the new WWE Women's Tag Team Champions. pic.twitter.com/8xhJe0l5bV