We start off with a look at the aftermath of Smackdown and what Erick Rowan did to Roman Reigns and Daniel Bryan.

Roman sees Daniel on what was left of the announce table. Roman heads to the back while Daniel is still down on the floor.

We see Drake Maverick with Lince Dorado and Hunberto Carrillo and Drake makes their match official. Drake says Dorado has mentioned his lack of title shots. Lince says he has never had a title shot in his time on 205 Live. Drake says he wonders what would have happened if Lince had the opportunities that Humberto has. Humberto says he earned his shot and Drake says he will not take that from Humberto. Drake tells Lince if he wins, he will be added to the title match at Clash of Champions.

We are in Norfolk, Virginia and your announcers are Aiden English, Nigel McGuinness, and Vid Joseph.

We see Maria in a room with a monitor.

Nese with a kick and Kanellis with a super kick and swinging reverse neck breaker for the three count.

Ariya Daivari shows up and wishes Lince Dorado luck in his match. Dorado wants to get ready for his match. Daivari expects a thank you. Daivari says if he didn’t take care of Metalik or beat Kalisto, you wouldn’t have your chance tonight. Dorado says Daivari is right that he has what it takes to be champion. Dorado says his hermanos don’t want to talk to him any more. Dordao calls Daivari a leech. Dorado says he will win tonight and he will win the title at Clash of Champions. Then he will call Metalik and Kalisto and apologize for Daivari’s actions to split them up.

We are back with Samir and Sunil Singh. Samir says they are making major ground in their studies. Sunil says everything went wrong when Brian Kendrick and Akira Tozawa stuck their noses in their business.

After the match, Kendrick says another week and another Jack Gallagher no show and he is not surprised. Brian says he talked to Drake Maverick and you will have a chance to wrestle next week at Madison Square Garden in a tag match against him and Akira Tozawa against you and a partner of your choosing.

We are back and Oney Lorcan is asked about wanting to face Drew Gulak but he sees Tony Nese in a bad mood. Oney goes over to tell Tony he has been there. Tony attacks Oney and sends him into the wall and a production case. Officials show up to separete Tony and Oney.

Match Number Three: Lince Dorado versus Humberto Carrillo in an If Lince Wins, He is Added to the Cruiserweight Title Match at Clash Of Champions Match

After the match, Drew Gulak attacks Lince Dorado on the ramp. Drew with a forearm to Dorado. Tony Nese comes out and attacks Carrillo.

Nese and Gulak give each other that look and they are working together. Dorado and Gulak exchange punches after a drop kick from Dorado. Gulak sends Dorado into the turnbuckles. Gulak lets Nese do the honors and Nese with a running knee to Dorado. Gulak with a Cyclone Crash to Humberto. 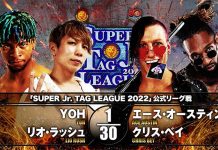